In this article we are going to talk about different sizes of ukulele and how does it sound. Basically, there are four types of ukulele they are Soprano, Concert, Tenor and Baritone. We’ll help you how to measure ukulele and figure out which one is best for you.

Let’s start with the smallest one which is Soprano Ukulele or also known as standard ukulele. We also get Soprano in bit smaller size as well; these ones are mostly for kids so here we will be talking about standard Soprano ukulele. So, the general rule with not just ukulele but all string instruments is the smaller the body, the higher the pitch, this doesn’t mean the volume but simply the pitch it’s because we don’t have a huge body for the sound to get resonated. So Soprano ukuleles tend to sound more trebly. Soprano ukes are amazing cause they are easy to hold, light-weighted, and are great for strumming as it is small in size and you don’t get enough place for playing leads or anything apart from the chord. This was about soprano now let’s go one step up

So next we have is the Concert Ukulele, if compared to soprano it has just got a bit bigger by body and neck. The bigger body of the concert ukulele provides a more mid-range sound and bass, this is typical as we keep moving on to bigger sizes. The neck for concert ukes is longer and wider which makes them sound great not just for chords but also for playing notes. The intonation for concert ukuleles is also the best they remain in tune better as compared to soprano they get out of tune easily. The concert ukuleles are a great choice for beginners as it is a little bit bigger than the soprano and sounds brighter just like a traditional ukulele.

The Tenor Ukulele has a bigger body compared to Soprano and Concert. The neck is longer, and frets are wider. The bigger and wider body of tenor ukuleles produces more mid-range and more bass which makes it louder and also the longer fretboard gives you a great option to play chords and also for playing notes or scales.

The last ukulele will be talking about today is the Baritone Ukulele. Baritone ukuleles have a bigger and wider body and also longer neck compared to all the types of the ukulele. The baritone ukulele is actually the size of tenor guitar but because of the four strings, it’s a ukulele. The thing to keep in mind with the baritone is that the tunings are a little different if compared to other types of ukuleles. For example, on the baritone the first string is ‘E’, Second string is ‘B’, Third-string is ‘G’ and Fourth string is ‘D’ but if you compared it with tenor the First string is ‘A’, Second String is ‘E’, Third-string is ‘C’ and then the fourth string is  ‘G’ keep this thing in mind because most of the time you see online are written for the Concert, Soprano and the Tenor ukuleles. So, make sure if you have a baritone you check for the things which are specifically written for Baritone ukuleles.

So now let’s talk about how will you measure ukulele. Ukuleles are measured from the nut at the top to the bridge down also called a saddle. So simply you can grab the measuring tape and measure it from the nut to the saddle then you’ll get the size of your ukulele that’s the length of it. 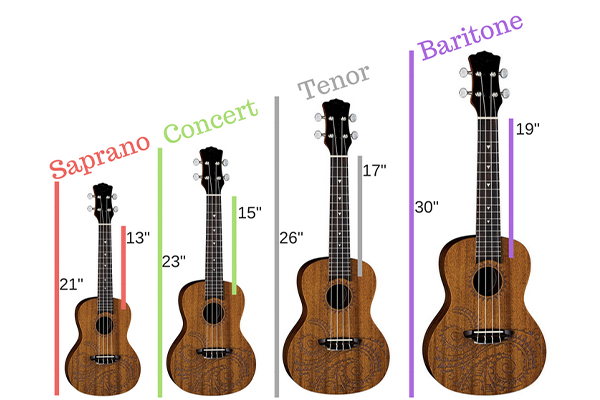 Soprano ukuleles go between 13 to 14 inches which can vary from company to company. The concert ukulele will be from 14 to 15 inches and a Baritone will be 19 inches. So, as the length increases it allows your strings to gain you access to the low notes also the body and size also help to determine that sound.

What ukulele is right for you

There are many different choices out there between these four different sizes we have talked about, and also there are many kinds of different woods from solid to laminated to koa to spruce also you get plastic body ukulele which is waterproof.

Let’s talk about size though

Talking about the size though concert ukuleles are the best as they are not too big and not too small, it’s a great instrument on which you can strum chords and also play scales or notes. You also have to choose the ukulele depending on your height. Like if you are 6 or 5 you would probably go with a Tenor ukulele that would be better for you. And if you are smaller than that then you would have to go with the Soprano.

There is a lot of variety out there so it would be anytime better to speak to a gear specialist who will understand your needs and requirement and suggest you the best one which fits you. Also, checking out for some videos and reading about them can also help you decide the best one you are looking for.

THE EVOLUTION OF HEADPHONES
Admin December 21, 2020