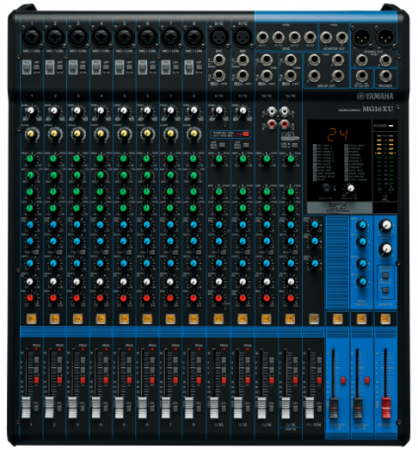 The MG06X — A Great Sounding Compact Mixer
If you do solo gigs then you know what a hassle it can be to have to lug a bunch of gear around. You don’t need enough gear for a whole band, you just need a few inputs for you and your guitar or keyboard. If you could just plug into the venue’s speakers then you really wouldn’t need to bring much with you to the gig. That’s where a small mixer like the Yamaha MG06X comes in. This little guy comes with everything you need for small performance situations.

The Nuts and Bolts
This mixer comes with two mono mic/line channels that have a 26dB pad, a high-pass filter at 80Hz, and separate high and low EQ controls. The channels are outfitted with Yamaha’s discrete Class-A D-PRE mic preamps with an inverted Darlington circuit and they sound really good. There is phantom power so you can use your favorite condenser mic. There are also two stereo line-level channels that can also be used in mono. Also included are six effects programs with preset reverbs and delays, XLR balanced outputs, an output for headphones, all built into a solid-feeling metal chassis.

Plug and Play
The MG06X is very easy to use and set up. All you really have to do to get going is plug in either a microphone, a guitar, or a keyboard. Then plug in your headphones or connect the outs to a set of speakers. After that just turn the volume up and you’re off and running. 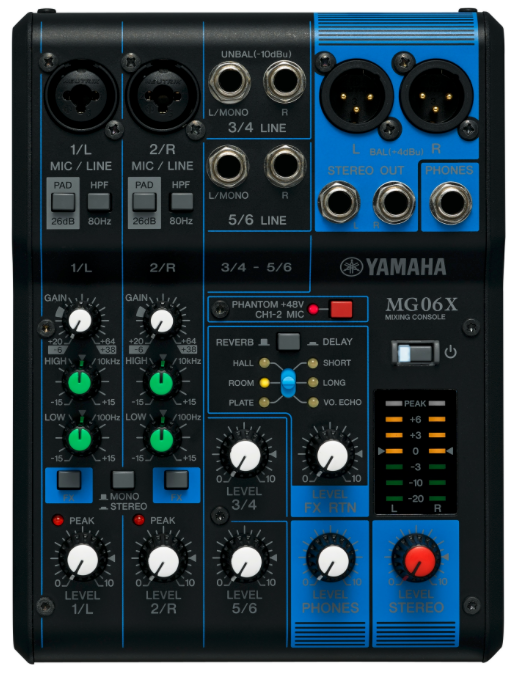 I tried the MG06X out with dynamic and condenser mics and they both worked very well and sounded good. The EQ section is simple but it added what I needed. The high EQ gave a nice clear and breathy high end to my voice and just a little turn of the low EQ brought out body in the sound. The same went for channel two when I plugged in an acoustic guitar. The sounds were nice and clean with plenty of headroom. I didn’t clip or distort anything. The stereo line channels made it super easy to connect my computer so I could play along with tracks. I just needed an adapter to go from the computer’s mini plug to two 1/4-inch jacks.

Seeing that the effects were not adjustable made me first think that they would not be very useful. But I found that first impression to be wrong. They were quite nice and easy to use. You just pick whether you want to use reverb or delay by pressing the button, then adjust the switch to the effect you want to use. The FX RTN knob dials in the amount of the effect you hear. There are three different kinds of reverbs and three different kinds of delays, and even though you cannot make major adjustments to the effects, Yamaha did a nice job in making them very usable. I just needed to get the return knob set to the right amount and it worked great.

The XLR balanced outputs make it very convenient to plug into a house PA or directly to a set of powered speakers or studio monitors.

The MG16XU – A Well-rounded Analog Mixing Console
The MG16XU is a fully loaded 16-channel analog mixer that is great sounding and easy to use. This mixer seems very well suited to live settings in a portable rig or as a permanent install in a club or church. Before I even looked at the manual I turned on the mixer to see how hard it was to make some sounds and it was very easy to do. The console set up is intuitive and everything was easy to see and find. I was getting sound through the console within seconds.

The Ins and Outs
For all of you tech heads out there you will like the fact that the MG16XU has 16 channels of input and just like the MG06X, they are outfitted with Yamaha’s discrete Class-A D-PRE mic preamps with an inverted Darlington circuit. There are eight mono MIC/LINE, two mono/stereo MIC/LINE, and two LINE. Enough inputs for a small band with channels for keyboards or a computer for playback of tracks.

The console has a nice set of outputs as well. There are the main balanced stereo outs, plus four separate group outputs, and four aux sends and returns. The console also comes with a nice set of built-in effects so you could use the AUXs for monitor sends if you like. Each of the eight MIC/LINE inputs has a 26dB pad, 80Hz high-pass filter, and a 3-band EQ with sweepable midrange. The two mono/stereo MIC/LINE inputs have the 3-band EQ without the sweepable midrange. A really great feature on the MG16XU is the “one knob compressor” knob on each of the eight MIC inputs. There is also phantom power for condenser mics and a USB 2.0 audio interface capable of 24-bit/192kHz resolution. A nice feature if you want to record the main stereo outputs to your DAW or play back music from your computer. Plus, the MG16X is compatible with iOS devices as well.

That’s the Specs, Now How Does It Sound?
I found the MG16XU to sound really good. I plugged in a Shure Beta 58 vocal mic and an acoustic guitar direct into the board and was really encouraged by how easy it was to get right into playing music. The EQ section is wide ranging and I was able to dial in a clear and warm tone on both my voice and my guitar. The sweepable midrange is a great feature for that. The “one knob compressor” gave both my voice and guitar a nice boost and presence. Then by bringing in some of the onboard effects really brought everything together. The reverbs are very nice sounding and clean and even some of the crazier effects like the tremolo, flanger, and distortion are very usable. They made the AUX knob for the onboard effect white so you can’t miss it.

The last thing I did with the console was to plug in my iPod and play music through the board. Again, the MG16XU sounded great with lots of output and room for more.

Wrap Up
For a little mixer, the Yamaha MG06X works and sounds great and makes it super easy for the solo musician or duo to be up and performing in no time at all. If you are a public speaker and need to carry around something to make sure you always have what you need to be clearly heard then this little mixer is also great. I’m sure you have heard the term Big Things Come In Small Packages and that saying is perfect for the Yamaha MG06X.

With the MX16XU you get a very easy to use, great sounding mixer that will work in many different situations. You could put it in a club to use with a house PA. If you are a traveling band and need an easy solution that you know will work night in and night out, the MG16XU is a great option. It allows easy recording of rehearsals and performances via USB, and it offers plenty of options for shaping your sound.

Getting Started with your Acoustic Guitar
paresh Vijay April 13, 2020