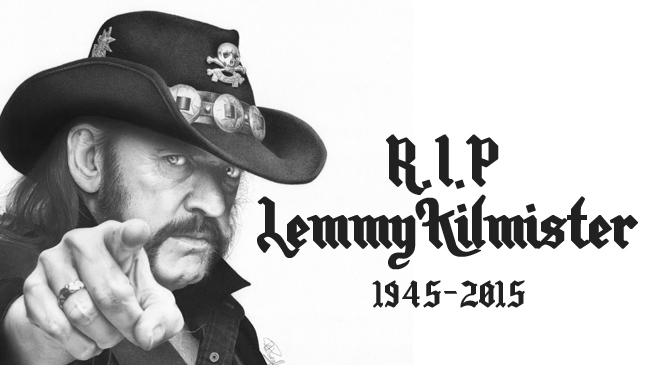 Lemmy Kilmister has died at the age of 70. Motorhead confirmed his death, saying their frontman passed “after a short battle with an extremely aggressive cancer.”
The band added that they “cannot begin to express our shock and sadness; there aren’t words. We will say more in the coming days, but for now, please … play Motorhead loud, play Hawkwind loud, play Lemmy’s music LOUD. Have a drink or few. Share stories. Celebrate the LIFE this lovely, wonderful man celebrated so vibrantly himself. HE WOULD WANT EXACTLY THAT.”
Lemmy’s final illness followed numerous health issues over the past few years, most recently this summer, when a lung infection forced six shows to either be curtailed shortly after taking the stage or canceled outright. In 2013, he suffered a hematoma and had been fitted with a defibrillator to correct heart problems. Throughout all Lemmy’s scares, he maintained his sense of humor, saying “Apparently, I am still indestructible” back in August.

Born on Christmas Eve 1945, in Stoke-on Trent, Staffordshire, England, Kilmister (whose nickname allegedly originated in his habit of asking everyone to “lemmy a fiver”) was abandoned by his father – a Royal Air Force chaplain – at three months of age, then raised by his mother and a strict stepfather in North Wales.
At age 16, he saw the Beatles perform at Liverpool’s Cavern Club, and began teaching himself guitar. Lemmy joined his first bands in the mid ’60s, cutting his teeth on northern England’s tour circuit with the Rainmakers, the Motown Sect and the Rockin’ Vickers. By 1967, Lemmy was established in London, rooming with Noel Redding and briefly working as a roadie for the Jimi Hendrix Experience before linking up with psychedelic rockers Sam Gopal in ’68.
He then joined Hawkwind as a bassist in 1972, playing on four albums (including Doremi Fasol Latido and Space Ritual) while lending his already recognizably hoarse vocals to Hawkwind’s biggest hit “Silver Machine.” He was fired in 1975, however, after an arrest for drug possession while on tour.
Lemmy plotted his revenge by forming a new band called “Bastard” with erstwhile Pink Fairies guitarist Larry Wallis and drummer Lucas Fox. They later changed their name to Motorhead in reference to the final song Lemmy wrote with Hawkwind, then re-recorded the track for what would have been Motorhead’s debut, On Parole. United Artists, the fledgling trio’s former label, rejected the LP, however. Almost two years would pass before Lemmy and his new cohorts, guitarist “Fast” Eddie Clarke and drummer Phil “Philthy Animal” Taylor, released updated versions of those songs as Motorhead’s eponymous 1977 debut.
After another year of ruthless touring, the trio truly hit their stride behind a string of legendary albums in Overkill, Bomber and Ace of Spades. This era of success was capped by the live album No Sleep ‘til Hammersmith, which debuted in 1981 at No. 1 on the U.K. charts – an astonishing feat, considering Motorhead’s incomparably raw and frantic sound had some critics labeling them the “worst band in the world.”
For hard rock and heavy metal fans everywhere, however, Motorhead were now proven royalty. Their influence on the burgeoning speed and thrash metal movements of the ’80s was second to none, and though their career fortunes fluctuated – and numerous lineup reshuffles followed – Motorhead’s underground credibility rarely wavered.

Listen to ‘Till The End’ from Lemmy’s Final Motorhead Album