News that the Pope has launched a music career poses so many important questions: Is God a DJ after all? Is there really a half pipe in heaven? Who’s actually bigger – Jesus or Adele?

The record – ‘Wake Up’, out today – bears the Pope’s name and comes with a stamp of approval from the Vatican, but Pope Francis himself had little involvement in the project. Instead, the album was helmed by a Priest named Don Giulio Neroni, who worked with a variety of musicians plus former members of Italian prog-rock band Le Orme to produce a baffling – but surprisingly not completely awful – mix of post-rock, Gregorian chants and Disney-style ballads.

We spoke to Don Neroni about his involvement in the Pope’s ‘rock’ album and being God’s producer on Earth. Unfortunately, however, we will never know why he didn’t name the album Peezus.

How did you first become producer for the Pope?

“I work as a priest for the Sao Paulo Society. The Sao Paulo society’s mission is to spread God’s word, through the media and a while back, I was given the job to spread the word of God through music. Hence I then became responsible for all things musical for the Vatican.”

How much input did Pope Francis actually have in the album?

“The influence on the album from the Pope is kind of total, because in every single track of the album you can hear Pope Francis’ voice against the Gregorian chants. The album uses real contemporary music to rearrange the original melodies from the Gregorian chants. So on the album you can hear from pop to rock, and this is something that could have only been done with this Pope, with Pope Francis. With Pope Jean-Paul II and Benedict, I could not use this kind of modern and contemporary music, but I could do it with Pope Francis because he is a different kind of Pope.”

How is Pope Francis different to previous leaders of the Vatican? Some have called him the “rockstar Pope”, do you agree with this?

“This album is extremely close to the character of Pope Francis. He is a Pope who touches the people, who uses simple language to actually effectively deliver the God’s message in a really simple manner, and that’s why we could use this kind of music. The previous Popes were doing high theology and they weren’t really communicating to people, or at least not on the same level that Pope Francis is.”

“For the past 50 years, since I’ve been a priest, I have been waiting for a Pope like this one, for a Pope like Pope Francis, a Pope who can actually talk to people and communicate and empathise with them, and actually put his face on the line every day, to deliver the message of compassion and love. In some ways, he can be compared to Jesus, even though Jesus is Jesus, and, you know, they are two different things. But in the way he speaks to people.”

The album has surprised many by how experimental and modern it is. What does Pope Francis himself think of the music on the album?

“I don’t not know what the Pope thinks about the album. I sent him the master in August, but haven’t had a chance to actually speak with him about it yet.”

What is your own personal music taste?

“My taste is traditional Neapolitan and Roman music. Why is that? Because I’m old, and when you’re old you usually go back to the first things that made an impression and a mark in your life.”

There’s some pretty experimental stuff on there. Where did that come from?

“I was already familiar with rock music. In fact, I did a couple of previous albums using rock music. Rock music reaches out to young people. Like what Pope Francis does, it speaks directly to the people. I wanted to use this modern music to aim to the youngest people.”

If the Pope is the voice of God on Earth, and you make the Pope’s music, that technically means you are God’s producer on Earth. Is this a heavy burden to hold?

“No, there is no burden or heavy weight or responsibility in that it’s simply what I do. It is my life, My aim is to communicate the Pope’s thoughts and I also do this through music. This is what a priest does, is to communicate and divulge the word of God, and the Pope. It is not a heavy weight, it is just a pleasure.”

11
SHARES
VIEWS
FacebookTwitterGoogleWhatsapp
Tags:
Previous Article
M.I.A’s New Single ‘Borders’ Is A Rallying Cry On Behalf Of Refugees Around The World
Next Article
72 Music Production Tips I Wish I Knew When I Started

M.I.A’s New Single ‘Borders’ Is A Rallying Cry On Behalf Of Refugees Around The World
November 30, 2015 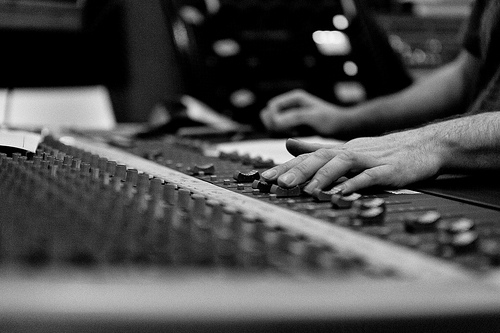