Let’s face it: one of the most important parts of a song is its intro.

A memorable intro can bring lighters out of pockets, prompt roars of recognition from a crowd and cause freeway drivers to reach for the volume knob.

We’ve compiled 20 of what think are the greatest rock and roll intros of all time. Check them out, and then tell us some that you’d like to see on the list.

Although George Harrison and John Lennon kick off this legendary single-note passage playing in unison, it was Lennon who actually came up with the riff. The part proved to be the perfect introduction for a perfect song, as the tune went on to become one of the Beatles’ most familiar hits upon its release as a single in December 1965. The part itself is quite simple and is performed in open position. Incidentally, the intro is also the basis for the song’s verse, interlude and outro chorus.

If you like your music dark and heavy, you’d be hard-pressed to find any band that does it better than Metallica. “Enter Sandman” was the lead single from the group’s self-titled 1991 Black Album. The song’s intro is instantly recognizable, with the acoustic guitar sounding out a menacing one-measure pattern based around the key of E minor.

Ironically, the signature sound is due in large part to the presence of Bb, the one note from the riff that is outside of the key. That note forms a tritone with the root pitch, E, providing the dissonance that is appropriate to the song’s mood and foreshadowing the bombast that follows.

Although “Stairway to Heaven” may seem like the more obvious Led Zeppelin track to include here, the bone-crushing intro to “Heartbreaker” is just as historic. Jimmy Page’s tailor-made hard-rock riff is based on the A blues scale (A C D Eb E G) and combines a thundering groove with an intangible dose of attitude.

“Iron Man” is classic heavy metal at its finest. The song, from 1970’s Paranoid album, remains a perennial guitar favorite and is arguably Black Sabbath’s most definitive piece of work. Guitarist Tony Iommi’s groaning intro is downright belligerent. The bending of the low E pitch is performed by pressing down on the open string, behind the nut, raising the pitch approximately one whole step before the bend is released.

The British group Yes helped introduce and popularize progressive “art” rock during their prominence in the Seventies. “Roundabout” appeared on the group’s fourth album, Fragile, and stood as their biggest hit until they released “Owner of a Lonely Heart” in 1983. The intro to “Roundabout” is legendary. Steve Howe sets the song up by executing a few well-chosen harmonics at the 12th fret. Also noteworthy are the fretted licks that follow the opening harmonics. Here, we witness Howe’s nimble acoustic chops as he deftly maneuvers his way through a series of notes taken from the E minor scale (E F# G A B C D).

“Smoke on the Water,” Deep Purple

There’s no question that this song has one of the most famous intros of all time. Deep Purple cut the Machine Head track in a Montreux, Switzerland, ballroom in 1972, and the piece went on to become the quintessential riff-rock anthem.

Although the riff can logically be played in open position using the 3rd and 4th strings, Ritchie Blackmore performs it on the 4th and 5th strings.

His dyads were claw picked, meaning that he plucked each of the notes simultaneously using one finger for each string, rather than strumming the notes with a pick.

“Sunshine of Your Love,” Cream

Although Cream bassist Jack Bruce reportedly played a role in the creation of this song’s signature lick, it was Eric Clapton’s Les Paul Special and 100-watt Marshall that delivered the hit. “Sunshine of Your Love” features one of rock’s most enduring hooks. The syncopated, “off the beat” riff appears throughout and provides the primary rhythmic foundation. All of the notes in the riff are derived from the D blues scale (D F G Ab A C).

“You Really Got Me,” The Kinks/Van Halen

“You Really Got Me” is rock and roll at its finest. The Kinks’ original version pioneered riff-oriented guitar rock in 1964, and Van Halen’s 1978 cover further established the song as a bona fide classic. A sheer showcase of simplicity, the intro is propelled by a repetitive two-chord rhythm figure. The Kinks’ version is accomplished by way of sliding power chords with their root on the sixth string, while Van Halen’s revved-up rendition transposes the part up a whole step and features added distortion. Rhythmically there’s nothing tricky about it. It’s just a straight-ahead eighth-note rocker.

This classic Aerosmith song was so good that it was two hits in one. In 1973, it was one of two songs, along with “Sweet Emotion,” on Aerosmith’s third album, Toys in the Attic, helping to propel the band into rock’s forefront. Then, in 1986, Aerosmith had a hit with it again when Run DMC took its rap-friendly verses out even further, with lead singer Steven Tyler and guitarist Joe Perry along for the ride.

Van Halen have a boatload of great intros—“Eruption,” “Jamie’s Crying,” “Runnin’ with the Devil,” to name a few—but “Ain’t Talkin’ ’Bout Love,” from the group’s debut, stands as the favorite of many. The riff is a classic example of Eddie Van Halen’s sound and style. In a wash of distortion and delay, he masterfully manipulates his guitar to bring out the nuances in this riff with palm muting and accents.

“Killing in the Name,” Rage Against the Machine

The tempo- and rhythm-shifting intro on this classic Rage tune keeps you on your toes.

By the time guitar Tom Morello and his bandmates settle into the song’s menacing, slow but powerful groove, it almost feels like an entirely different song.

“Killing in the Name” is proof that a truly great intro can stand on its own.

Opening with the tritone, Jimi Hendrix gave “Purple Haze” a truly demonic sound that signaled the arrival of something in music that was mysterious, dark and deliciously devilish. Some say this is ground zero for heavy metal, and who are we to disagree?

Sure, he took the intro for this rock and roll classic from Louis Jordan’s 1946 recording of “Ain’t That Just Like a Woman,” but Berry turned it into something fresh that inspired a whole generation of guitarists.

He used variations on the lick in several well-known cuts over the years, but regardless of the version, there are three main ingredients to the “Johnny” lick: the three-note pickup, double-stops and slides. The pickup notes are derived from the Bb major pentatonic scale (Bb C D F G), the manic double-stops employ the root (Bb) and 5th (F), and the slides are interspersed throughout.

Some have called it the greatest opening riff in rock and roll history. If nothing else, it features the work of two of rock’s greatest guitar legends: Eric Clapton and Duane Allman.

Producer Tom Dowd said of the chemistry between Clapton and Duane Allman, “There had to be some sort of telepathy going on, because I’ve never seen spontaneous inspiration happen at that rate and level.

One of them would play something, and the other reacted instantaneously. Never once did either of them have to say, ‘Could you play that again, please?’ It was like two hands in a glove.”

Dave Grohl emerged from the ashes of grunge music with Foo Fighters. Having played all the instruments on the group’s debut album, Grohl subsequently proved that his band could play too when they all tore it up on their sophomore release, The Colour and the Shape. “Monkey Wrench” combines two guitar parts to create a wall of sound.

Guitar 1 takes advantage of the open B and E strings to fatten up the riff’s melody, which is played on the G string. Guitar 2, meanwhile, effectively uses power chords to complement the melody while fattening up the low end.

Ozzy Osbourne has the distinction of being not only one of heavy metal’s founders (in Black Sabbath) but also an extremely successful solo artist in his own right. Kudos here go to Randy Rhoads, who performs the familiar dark-sounding riff on “Crazy Train” by taking advantage of the F# natural minor scale (F#, G#, A, B, C#, D, E), which includes three distinctively metal-flavored notes: the flat 3rd, flat 6th and flat 7th—A, D and E, respectively.

“Nothing Else Matters,” Metallica

As is common for metal bands, this intro has the flavorings of classic music (it’s particularly reminiscent of “Romance,” an anonymous Spanish folk melody). Metallica rhythm guitarist James Hetfield wrote the song while he was on the phone with his then-girlfriend, plucking the low E, G, B and high-E strings with the fingers of his free hand.

Though he wrote the song with no intentions of recording it with Metallica, he was convinced otherwise after drummer Lars Ulrich heard it. “Nothing Else Matters” subsequently became the third single from the band’s 1991, self-titled Black Album.

“Start Me Up,” The Rolling Stones

Reportedly, Microsoft founder Bill Gates approached the Stones about using this song in a Microsoft commercial. Thinking he’d never pay enough, they offhandedly demanded $11 million for the right to use it. The Stones quickly learned that no song is too expensive for the world’s richest man, and “Start Me Up” became the soundtrack for Windows ’95.

Keith Richards has proven time and again that he is the ultimate open-G tuning riffmeister, and “Start Me Up” is one of his finest efforts. It’s also surprisingly easy, using just two chord shapes throughout the entire intro.

“I Feel Fine,” The Beatles

John Lennon came up with this song’s memorable riff during the sessions for the group’s fourth album, Beatles for Sale.

The feedback that precedes it was an accident that occurred when bassist Paul McCartney struck a note on his instrument, which then set Lennon’s Gibson J-160E acoustic-electric vibrating. The guitar was leaning against his Vox amp, which began to feedback. The group’s liked the effect so much they decided to record it and tack it onto the intro of “I Feel Fine.”

“What’s that? Voodoo?” McCartney asked when he first heard the sound. You could call it that.

Slash created this song’s iconic opener as a string-skipping exercise. When he began playing it as a joke during a band rehearsal, it instantly resonated with rhythm guitarist Izzy Stradlin, who began writing some chords to go beneath it, while Duff McKagan devised a bassline.

Slash might have considered the riff a “circus” melody, but it made “Sweet Child O’ Mine” one of the biggest hits in Guns N’ Roses’ catalog. 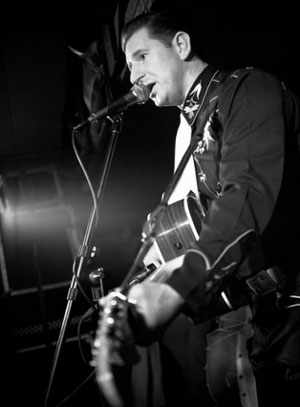