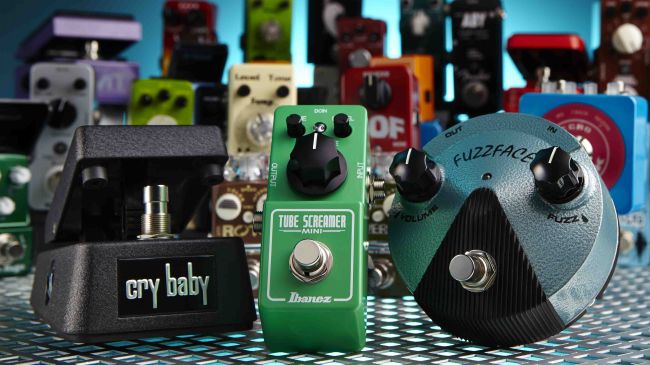 They came to conquer your pedalboard. Like the polar ice caps or Dairy Milk bars, pedals are shrinking, and with bona fide classics such as the Cry Baby and Tube Screamer receiving circuit board liposuction, mini pedals going aren’t going anywhere but underneath our feet.

As a brief scour of various online retailers will tell you, there are absolutely tons of them, all of which are enablers for jamming more effects on your existing pedalboard or downsizing your rig, but best of all, they’re cheaper than (integrated circuit) chips.

Over the following pages, we present our picks of the finest mini pedals available today – let’s step on it…

You know what to expect from a TS, and the Mini will get your mids humping and your single coils beefing up with the best of ’em. It’s not the smoothest Screamer we’ve heard, but it is faithful to the 80s incarnation in that it compresses up a treat and cuts the low-end a little.

Ramp up your amp, cut the TS Mini’s gain and up the volume, and it gives distorted tones extra attack – and that’s possibly its greatest strength.

Buy it for… Giving your tone a kick in the mids

With a name derived from Greek mythology – like a certain Centaur overdrive – this Mini-taur invites you into a labyrinth of quality Klon-inspired tone.

It’s hard to believe at this price, but the Minotaur does a fine approximation of the Centaur sound, with an upper-midrange boost that’s more open and dynamic than a TS-style overdrive.

It has a mighty gain range, too, from clean boost to fat, amp-like drive, but at higher ‘fury’ levels, its midrange can get a little part-man-part-bull in a china shop, so for our money, it’s best used for a hint of break-up or tonal enhancement.

Buy it for… Adding break-up-style sparkle to your tone

Based on a famous overdrive by the name of OCD, the Husky Drive doesn’t conceal its origins, but we’ll be damned if it doesn’t sound good for £49.

Not as mid-heavy as the other drives on test, it delivers a huge set of sounds, from the lightest of break-ups to borderline distortion, although it develops a little fuzz-like hair at this point.

If you fancy a little more cut, flicking over to the high-peak setting gives you extra upper-mids and treble, but wherever it’s set, the Husky Drive is incredibly dynamic, and with humbuckers, it delivers meat ‘n’ potatoes rock and blues tones of the highest order.

Based on the Echoplex EP-3 preamp, as used by Jimmy Page and Eddie Van Halen back in the day, the EP Booster is super-simple, and adds a rough-around-the-edges flavour to any amp while tightening up dirty tones and adding extra treble bite.

Boost a clean-ish British combo for instant Led Zep I & II tones, then wind your amp up to overdrive, set the EP Booster to max, and you’ll nail that tight palm-muted Ain’t Talkin’ ‘Bout Love sound. A trio of internal switches adjust the pedal’s brightness and give you an extra 3dB of boost, too!

This lilliputian pedal does hot-rodded Plexi tones for less than £50 – and no, we ain’t trolling.

There’s a ridiculous amount of gain on offer here: 10 o’clock on the aptly named fury control will be more than enough for most players, and beyond that, the pedal gets pretty messy – the same goes for the over-bright tone control.

However, keep each control to their 10 o’clock sweet spots, and the Troll delivers an incredible simulation of an EVH-style modded Plexi, with all the tight articulation, fat mids and high-end attack of those fabled heads.

Roll down your volume knob, and it does a decent AC/DC and Hendrix, too!

Buy it for… Instant access to top-drawer hard-rock tones

The Seven Sisters line was released back in 2011, but these beauties won’t need to break out the anti-aging cream just yet: like her siblings, Ivy packs a still-cutting-edge rechargeable lithium battery – making this one of the few mini pedals that don’t require a power supply plugged in at all times.

It’s not one for amp-in-a-box-type sounds, but alt- and noise-rockers will love it.

If your electric isn’t packing EMGs and a pointy headstock, look away now: Stagg’s Metal dirtbox is designed for the ultimate in devastating tones.

Twisting the tone control allows you to sweep the pedal’s mid frequencies, and while engaging the low boost gives you a flatter, less scooped EQ, it’s a little honky for use outside the occasional solo.However, stick to what it does best, and this is a none-more-Blaxx bargain.

A shrunk-in-the-wash version of Rainger’s zany Air Traffic Controller, the ASI is essentially a distortion with a mixable white noise element, which runs through a low-pass filter. It’s like having a noisy auto-wah accompany your every note – but in a very good way.

Attack and Q buttons adjust the speed and resonance of the filter, but the unit really comes to life when you plug in the included Igor pressure sensor, which controls the cut-off frequency for ray gun-like zaps.

It’s a shame you can’t dial the white noise out completely to better appreciate the gnarly fuzz-tinged distortion, but this is a refreshingly different take on drive.

Which Audio Interface You Should Buy?
January 14, 2016 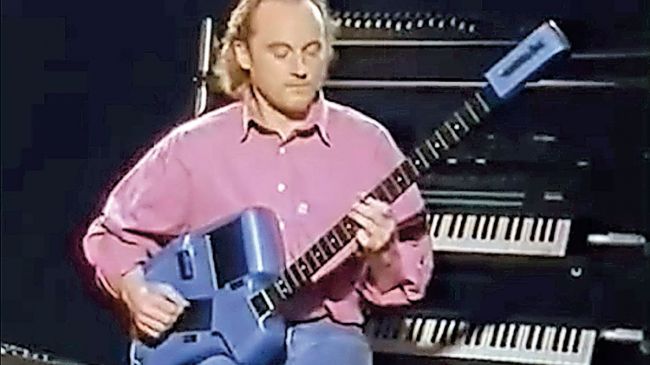