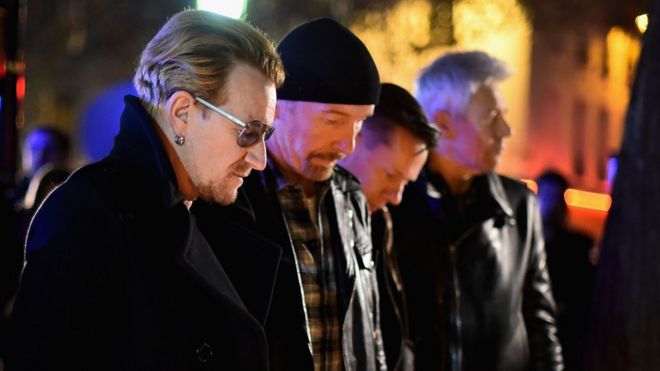 Motorhead, Coldplay and Foo Fighters have joined U2 in cancelling gigs in the wake of the Paris attacks.

Foo Fighters, who were due to perform in Paris on Monday, have called off the remaining dates of their European tour “in light of this senseless violence”.

Rock band Motorhead, who were scheduled to perform in the French capital on Sunday, will now play there in January.

Coldplay, meanwhile, called off a live stream of a concert “out of respect for the terrible events in Paris”.

Of the 129 people killed, 89 died when gunmen stormed the Bataclan concert venue where US rock band Eagles of Death Metal were performing.

The band members were unhurt, but Nick Alexander, a Briton selling merchandise at the gig, was among those killed.

Yusuf Islam, also known as Cat Stevens, has sent “love and condolences” to the family of the 36-year-old, who worked with the musician on a tour last year.

British band The Vamps have paid tribute to two others who died in Paris on Friday, who they identify as Thomas and Marie.

“We want to pass on our deepest condolences to the families and friends of Thomas and Marie who were a huge part of The Vamps team in France,” the band wrote on Facebook.

“They will be sorely missed by us and all that knew them.”

Thomas Ayad, who worked for Mercury Records, a division of Universal Music France, was killed at the Bataclan along with two colleagues, one of whom has been named as Marie Mosser.

“It is with profound sadness and heartfelt concern for everyone in Paris that we have been forced to announce the cancellation of the rest of our tour,” wrote Foo Fighters on Facebook.

“In light of this senseless violence, the closing of borders, and international mourning, we can’t continue right now.

“Our thoughts and prayers are with everyone who was hurt or who lost a loved one.”

The band had been due to perform in Turin on Sunday and in Barcelona on Thursday, with two dates in France on 16 and 17 November.

“Due to the serious situation in Paris we have to postpone our gig until January,” wrote Motorhead on Twitter.

“We are rescheduling and will give details ASAP.”

US metal band Deftones, who had been scheduled to play two shows at the Bataclan on Sunday and Monday and were in Paris at the time of the attacks, have also called off their shows.

“Thank for all your inquiries on our wellbeing,” the group wrote on Facebook.

“Band/Crew all safe and accounted for at this time. Prayers for those affected in these tragic events.”

Coldplay, meanwhile, called off a live stream of a concert at the Belasco Theatre in Los Angeles.

The concert was to have been beamed to fans across the world, but was not made available “out of respect for those affected”.

However, the band did play a short, unbroadcast set for those already at the venue on Saturday “so that [their] journey [wasn’t] wasted”.

U2, who had been due to perform in Paris on Saturday, instead spent the evening laying flowers near the Bataclan theatre.

“This is the first direct hit on music that we’ve had in this so-called war on terror, or whatever it’s called.”

Many music stars have turned to Twitter to express sadness about the attacks, which France is marking with three days of mourning.

“Our hearts are breaking for and with you,” wrote pop star Taylor Swift, while Peter Gabriel said “we are all Parisian today“.

In other related news: 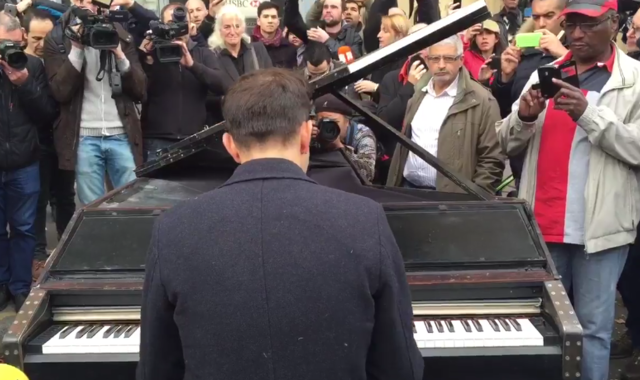