Details regarding everything that happened at the Bataclan last night have been a bit tough to find, since it was just one of six sites of unspeakable horror in Paris yesterday and much of the attention has been devoted to other subjects (timeline, responsibility, government reactions, etc). But if you’re a metalhead — or any music fan, really — that’s the info you’re most interested in reading. Because that’s the most fucking horrifying thing about these atrocities: it could’ve been any of us at the dozens of shows we go to every year to unwind, have a good time, headbang, drink and hang out with our friends. Surely you’re feeling flashes of Dimebag. Going to a show isn’t going to feel the same for quite a while.

So, here’s what we’ve been able to dig up about the attack at the Eagles of Death Metal show at Bataclan so far.

USA Today and NY Times both have excellent, detailed reports specifically related to the incident at Bataclan. Both reports include eyewitness account from those in and outside the venue, and they’re positively gut-wrenching. I encourage you to read both in full.

And there’s this: while multiple reports since last night have confirmed that everyone in Eagles of Death Metal is safe, we hadn’t heard anything about their crew. Until now: The Telegraph reports that veteran merch manager Nick Alexander — who was selling merch for Eagles of Death Metal last night — has been confirmed dead. The Telegraph has a chilling account of the incident relayed by Helen Wilson, who was with him at the time, and is currently recovering in a hospital for gunshot wounds to both of her legs:

Miss Wilson, 49, originally from New Orleans, also told how she witnessed the gunmen deliberately targeting concert-goers in wheelchairs. The gunmen hunted down disabled people who were sat in an area specially set aside for wheelchair users.

Miss Wilson, who runs a catering company Rock en Bol in Paris, said: “Nick was shot in front of me.”

It was around 9.45 pm when the first shots were fired, competing for noise with the rock music being played by the Californian band, Eagles of Death Metal, at the Bataclan.

“We heard a couple of noises outside and people started running into the club. We didn’t know what was going on,” said Miss Wilson.

“Then maybe five, six guys came in with machine guns and shotguns and just started shooting people. It was mayhem.

“When anyone started running they would shoot them down. So we got down on the floor. I was afraid whenever I heard a step behind me… they machine-gunned everybody.

“Nick was in front of me when we were lying on the ground and somebody moved and they just turned round and started shooting us.

“His back was to me and I couldn’t see what happened and I tried to keep him talking and then I tried to give him mouth-to-mouth resuscitation and they [the gunmen] were just sort of in the shadows and they would shoot if anyone said anything.

“Then he couldn’t breathe any more and I held him in my arms and told him I loved him. He was the love of my life.”

The following video was recorded by Daniel Psenny, a journalist for Le Monde, and re-posted by both USA Today and NY Times. The video is EXTREMELY graphic, and contains footage of dead bodies on the ground, injured concertgoers limping out of the venue, people dragging their dead or injured friends through the street and escapees literally hanging from windowsills.

The USA Today gathers eyewitness accounts into a single report of how the attack unfolded. An excerpt:

Gunmen  who had entered, dressed all in black and armed with AK-47 rifles, calmly opened fire randomly at patrons who dived for cover on the floor, according radio reporter Julien Pearce, who  was near the stage when the shooting started. “The terrorists were very calm, very determined, and they reloaded three or four times,” Pearce said. “I saw 20 to 25 bodies lying on the floor.

Pearce said he ran from the hall carrying a wounded teen-age girl. “The  Bataclan is not a huge room. … It was overcrowded. It was sold out. So it was easy for them,” he said of the terrorists.

Dominique Revert, a concert promoter and the venue’s co-owner, described for the French daily newspaper Le Figaro the scene discovered by his business partner, Jules Frutos, who ventured inside during the shooting. Frutos made it as far as the lobby where there were bodies on the floor and he could hear gunfire.

“These guys were armed to the teeth. What can you do against Kalashnikovs?” Revert lamented, adding that a Bataclan lighting technician was among the dead. Another of his friends was seriously wounded. 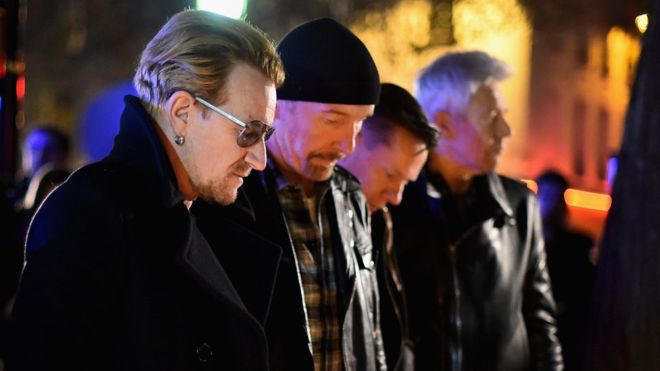