Hurts recently told NME that new album ‘Surrender’ is less “intense” than 2013’s ‘Exile’. Then they clarified: “But that’s not to say it’s all a barrel of laughs – we’re still drawn to the darker side”. Manchester duo Theo Hutchcraft and synth man Adam Anderson – whose sombre synthpop has sold like sauerkraut in mainland Europe – weren’t simply trying to appease the faithful. Behold the chorus of album centrepiece ‘Rolling Stone’, which reads like the title of a particularly grim episode of The Jeremy Kyle Show: “She said her daddy was an alcoholic and her mother was an animal…”

Yet with assistance from hotshot producers Stuart Price (Madonna, The Killers) and Ariel Rechtshaid (Haim, Vampire Weekend), Hurts have made an album that finds optimism. ‘Surrender’ begins with a stirring gospel-tinged intro and features some of the most euphoric pop songs Hutchcraft and Anderson have ever written. ‘Nothing Will Be Bigger Than Us’ is an EDM-flecked ode to togetherness, ‘Kaleidoscope’ gleefully pilfers the synth sounds from Fleetwood Mac’s ’80s earworm ‘Little Lies’ and ‘Some Kind Of Heaven’ is a fist-pumping love song to rival The Killers. Though ‘Why’ features some pretty anguished lyrics (“If this is love, why does it hurt so bad?”), they’re housed in a rousing chorus Coldplay would be proud of.

It’s not all swagger and bombast though. ‘Wish’, a relatively restrained piano ballad, and ‘Lights’, a slinky electro-funk nugget which sounds it like it belongs in an ’80s rom-com, prove Hurts can pull off subtle when they want to. But because gloomy electro-R&B tunes ‘RollingStone’ and ‘Slow’ are less entertaining in comparison, it’s difficult to ignore their slightly iffy lyrics. “But all I can think when you take off your mink is it’s over”, Hutchcraft sings on the latter, sounding more sulky Peter Stringfellow than sophisticated modern pop star. Thankfully, these two misfires can’t spoil an album packed with skyscraping highlights. 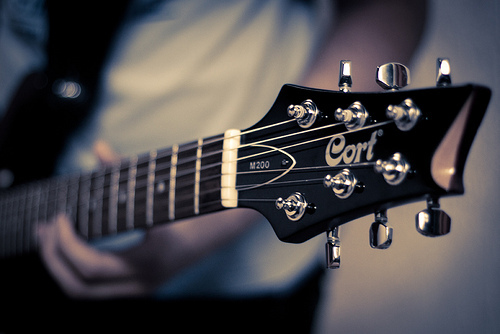 14 Powerful Quick Tips That Can Help You Instantly Improve Your Guitar Tone
November 5, 2015