No survey of the Marshall stack’s five-decade reign would be complete without honouring the players who have made them howl like fallen angels. Here, we present 11 essential licks in the style of 11 masters of the big black box.

The licks we’ve presented here trace the development of rock technique in the hands of key players as it developed in step with the ever-increasing shovelfuls of gain available from Marshall’s ever-evolving amps.

Certainly, there are many more legendary guitarists we could have included – Angus Young and Zakk Wylde come to mind – but getting these licks under your fingers will help you master the principles of getting air moving while retaining articulation, feel and speed.

And while unleashing what guitarist Joel O’Keeffe of Airbourne called “the Marshall wind” is a rite-of-passage experience for any guitarist, any decent high-gain head and closed-back cab will do the trick for getting to grips with the full girth and grunt of these examples, so plug in, turn on and rock out.

You can’t talk about Marshall stacks without mentioning the man who did more work stress-testing them than most Marshall employees! This lick uses E minor pentatonic (E G A B D) and there are a couple of things to listen out for.

Push the G to A bend (bar 3) a bit sharp, almost to the Bb. Then, while holding that last B-string bend in bar 4, catch the G string under your finger and release it.

His career was tragically cut short in 1982, but Randy was a hugely important player in the time between Van Halen and Yngwie, combining an elegant classically influenced melodic sense with meaty classic-rock licks. Remember, you don’t have to play these licks over the suggested chords. Be creative!

Over their long career, ZZ Top have gradually added more stylistic elements to their original swampy blues, but the Billy Gibbons guitar style has remained constant.

This is all about the Marshall stack, so we’re concentrating on Eric’s Cream period.

This was perhaps when he strayed furthest from his blues roots, with the raga influence of the time and the jazz background of his bandmates pulling his playing in new directions. We’re primarily using E minor pentatonic (E G A B D) adding that C# from the Dorian mode (E F# G A B C# D).

When 80s rock was getting dangerously preposterous and grandiose, Guns N’ Roses appeared in the nick of time, dragging us all back to the bluesy, funky sleaze of 70s hard rock.

Slash became the new guitar hero for a generation… a proper character with both chops and old-school rock cool. This lick uses D Mixolydian (D E F# G A B C D).

Most of the original late-60s rock guitar heroes came from a similar set of blues and rock ’n’ roll influences, but Ritchie Blackmore went off in a more classically influenced direction.

One of the world’s most admired and respected guitarists for over 25 years, Joe’s playing is an effortless mix of classic blues-based rock and more modern technical styles.

I’ve combined a bit of both here – some gritty doublestop work in E Dorian (E F# G A B C# D) followed by something a bit more stretchy and challenging.

This was particularly true in the case of Paul Kossoff’s guitar playing. Not only was it sparse and minimal, but he played every note with such intensity and passion. And don’t forget that ferocious vibrato!

As with Jimi Hendrix, it’s impossible to overstate the importance of Eddie Van Halen.

At a time when rock-guitar playing was settling a little too comfortably into slick blues-rock auto-pilot mode, Eddie added both an angular punk energy and phenomenal technical advances.

This lick uses the B blues scale (B D E F F# A) to combine supercharged blues lines with the tapping technique that turned so many heads back in 1977.

A different tack for this one! While Pete Townshend certainly played a lot of solos with The Who, the primary focus of his playing was his aggressive rhythm parts in support of the songs.

Here’s a little chord pattern that uses a pedal tone (the repeating D bass under the first three chords) and the sus4 chord sound that became something of a calling card for him.

Let’s go back to the mid 80s. While Yngwie was building on the classically influenced developments of Ritchie Blackmore, Steve Vai and Joe Satriani followed the Van Halen path, retaining some of the classic blues-rock energy in a diverse stylistic melange.

This lick is in C, and starts with one of Vai’s favourite scales, the Lydian Augmented (C D E F# G# A B), moving to a slippery tapping lick in F Lydian (F G A B C D E). 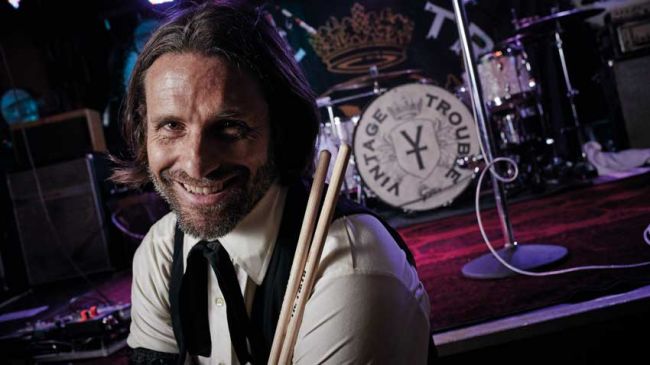