It’s been nearly five years since the release of her last studio album.

And on Thursday, Adele teased more details about the release of her upcoming third album 25 with her new single Hello set to be played for the first time on BBC Radio 1 on Friday.

In posts on her Facebook and new Instagram pages, the London-born singer, 27, confirmed her long-awaited album would be released on November 20 along with the cover art. 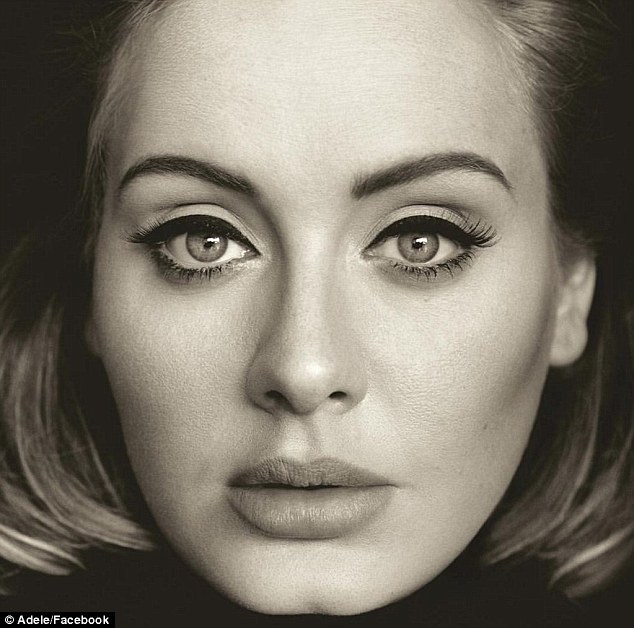 In comparison to her previous album covers which features the star with her eyes closed, this time the 27-year-old is starring directly into the camera in the black and white shot.

Her make-up is immaculately done with smoky black eyeliner and long lashes as she gazes wistfully at the camera.

The moody atmospheric shot is typical of Adele’s previous album and single artwork.

Perhaps her confident striking pose on the cover reflects the album’s content, which is said to be a ‘make-up record’ and more ‘adult’ than her previous offerings.

Her first single from the album, entitled Hello, will be played at 8am on Friday on Nick Grimshaw’s breakfast show.

Adele’s last album 21 came out in January 2011 – before the singer met her now-partner Simon Konecki –  14 years her senior – and went on to become a mother to son Angelo, who was born in October 2012.

She briefly came out of hiatus in late 2012 to record the theme song for Bond movie Skyfall and went on to win an Oscar, Golden Globe and Brit Award.

In a letter posted on her Facebook page on Wednesday, Adele explained to fans the process behind her new material.

She went on to explain that she had matured over the last few years and was no longer interested in obsessing over the past.

‘My last record was a break-up record and if I had to label this one I would call it a make-up record. I’m making up with myself. Making up for lost time. Making up for everything I ever did and never did.

‘But I haven’t got time to hold onto the crumbs of my past like I used to. What’s done is done.Turning 25 was a turning point for me, slap bang in the middle of my twenties.

‘Teetering on the edge of being an old adolescent and a fully-fledged adult, I made the decision to go into becoming who I’m going to be forever without a removal van full of my old junk.’

She continued: ‘I miss everything about my past, the good and the bad, but only because it won’t come back. When I was in it I wanted out! So typical. I’m on about being a teenager, sitting around and chatting s**t, not caring about the future because it didn’t matter then like it does now.

‘The ability to be flippant about everything and there be no consequences. Even following and breaking rules… is better than making the rules.

’25 is about getting to know who I’ve become without realising. And I’m so sorry it took so long, but you know, life happened.’

Last week, Adele whipped her fans into a frenzy after apparently teasing a snippet of her new song with a mysterious 30-second advert during The X Factor.

In August it was reported that she had been working on new music with the likes of OneRepublic’s Ryan Tedder, who produced and co-wrote Rumour Has It on 21, Gnarls Barkley’s Brian Burton and other music luminaries.