First impressions of the Orbit

If you’ve only seen the pictures of the Numark Orbit, don’t judge it just on those. Because I promise you that when you hold it, some of your preconceptions will change instantly. It’s really nicely made, and feels great in the hands. It’s got a decent weight to it, and the black casing is slightly rubberised with natural indentations on the underside for your fingers to settle in as you grab it, game controller-style, with two hands.

One thing people are right about: It really does look and feel like a game controller, clearly quite deliberately. Like the best such controllers, it is built to stand abuse, too. It has high-quality metal buttons top left and right on the edge for forefinger control, although unlike some game controllers there are no buttons on the back. The eight pads either side of the central jogwheel lend themselves to thumb control, so when you’re holding it in both hands, you have effectively two forefingers and two thumbs to access its buttons and the jogwheel. Everything else has been designed for that position to feel simple and natural.

On the right-hand edge of the Orbit is a small indentation where an on/off switch and a micro USB socket live, along with an LED to show you if the unit is charging via USB. Turning this switch on causes the unit’s lights to display arbitrary colours, and even when nothing’s plugged in, turning the jogwheel in the centre of the unit makes a blue LED ring rotate in the direction you’re moving the jog in. In a shaded place or at night the units lights are clear to see; in bright sunlight, however, it’s impossible to see them.

There are two chrome loops left and right bottom of the unit presumably for attaching a neck strap, and there’s a well-designed detachable brace at the back which could be used with the supplied Velcro strap to attach the unit presumably to your arm or something, although it felt way too wobbly when I tried it. Point is that it’s been designed to be carried, strapped, attached or hung however it suits you – befitting for a wireless device.

Setting up the Orbit

No software at all in the box. All you get, in fact, is the Orbit unit is self plus a slim slip carry case, the micro USB cable, the wireless dongle and a little USB extension, presumably for plugging the dongle into tight spots. To get the software, then, it’s off to the Numark website. The process is currently convoluted (two website addresses, each with different procedures to get your software; you have to give over an awful lot of personal information to get anywhere near a downloaded link, the “locate my serial” page doesn’t work…); Numark says it is working on streamlining this process.

Once you’ve jumped that hurdle (and, on a Mac at least, got past your computer bleating about unknown developers), you can get two basic pieces of software to play with. The first is the Orbit DJ program, which is the simplest way to experiment with the device, and the second is a Midi editing software so you can roll your sleeves up and get it to do custom stuff. Finally, Numark provides mapping files for existing DJ software too, and has started with a Traktor mapping, which we will look at here. Whatever you choose to use, to get started, you simply plug a the dongle into your computer, turn the Orbit on and – that’s it! I found the unit worked instantly.

Orbit DJ is a small program designed to show you what Orbit’s 16 backlit pads, 4 selectable banks, 4 virtual knobs per bank, and 2-axis accelerometer can do. Orbit DJ is essentially an over-simplified two-deck DJ program. No headphones cueing, no BPM analysis, no sync, no tempo adjustment, no library controls – you drag and drop tunes onto its decks and then control rudimentary transport and simple crossfading, volume, EQ and FX using the Orbit. As a DJ program, it’s a non-starter; as a demonstration of the Orbit, it’s fine. From that angle, let’s see what you can do with it. The Orbit’s top four buttons select what the jogwheel does. In this instance, only two of them work. They let you alter the volume of the current track, or use the jog as a crossfader. The bottom four buttons switch between four banks of main pad controls, and in this case they switch between transport/cues/loops and FX for each deck.

Meanwhile, the top metal buttons turn the motion control on or off; hold down this button with another (i.e. filter), and the further you move from level, the more pronounced the effect. It’s pretty neat stuff. When using the motion buttons, though, it also became clear to me that a very good additional way of using this unit is flat on a surface; cue juggling would be easier that way, and it has big rubber strips underneath it to keep it sturdy when being used like this. Being wireless, of course, it would easy to pick it up and put it down whenever you want.

With some improvements, Orbit DJ could actually be useful for playing parties and the like. It needs a sync function, library browsing and loading, the ability to use the jogwheel to manipulate current track, plus some weird behaviour ironing out (the “clear” button for the cues clears all of them, not allowing you to tap the one you want to clear), but I repeat that it’s there to show you what Orbit can do and prove the concept to you – plus, it’s only a v1. (Why not make those waveforms parallel in any future version too, Numark?) 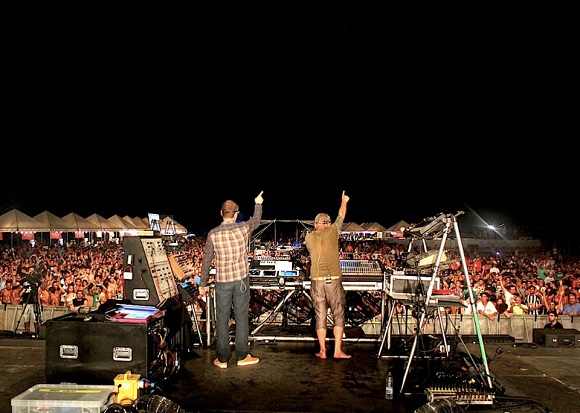