It’s hard to believe that as little as four years ago, the concept of dedicated hardware controllers for Native Instruments’ flagship DJ software Traktor was largely a fantasy. One look at the Traktor DJ controller page on NI’s website shows how fast things have progressed since then. There are now no less than six Traktor-centric hardware units, from the do-it-all S4 to the remix deck-dedicated F1.

The O.G., though, is the X1 , which first appeared in 2009. The X1 is now back, with a refreshed update that Native Instruments calls the MK2. If you’re familiar with the original, it won’t feel like much of a shock. It retains the same overall purpose in the Traktor DJ workflow. You can still browse and load tracks, set loop and cue points, trigger tracks with tempo adjustment and control the effects units directly from the controller itself. Generally speaking, the original X1 was designed as a side-caddy to whatever is performing the actual mixing duties (volume, gain, EQ, filter), whether that’s an external mixer or another controller mapped to Traktor’s internal one. The same is true here—no additional mixing features have been added. Quite a bit is new, though. Aesthetically the controller has been simplified quite a bit, with much less text cluttering up the front. While this makes for a nicer overall look, it does mean that at least one trip to the manual is required to really understand what’s possible. This is especially true for the loop encoders, which lost their labels altogether and gained new functionality (tempo change) to boot. There comes a time where it is impossible to visually represent everything that you can do with a single control, and the X1 MK2 seems to have reached that point. Fortunately there are two new small LCD displays that provide some feedback based on what is presently being controlled.

Sandwiched between the LCD displays is the new browse encoder, which replaces the two from the original X1 into a unified central version. Some X1 users might not like this change, as it requires you to use two (admittedly somewhat small) buttons to assign tracks from the browser to the decks. The upside to this is that the encoder is now touch-sensitive, which means that Traktor automatically switches to the browser view when you make contact with the encoder. This is a thoughtful addition that makes things nice and easy when searching for tracks in a frenzied DJ booth.

The touch strip is undoubtedly the biggest change to the X1. These have been showing up more and more in the gear world lately, but in the case of the X1 it’s an especially meaningful addition that does quite a bit to enhance functionality. By default it is split in half, with the two regions controlling the decks in an intuitive way. If a deck is playing, the touch strip does a temporary pitchbend-style tempo correction. If it’s stopped, it allows you to scratch the track. You can also use the touch strip to quickly seek through a track on a stopped deck by holding the shift key. If you want more real estate on the touch strip, it can be resized to one side or the other so that the entire strip controls a single deck. Taken on its own, this deck control is quite useful. When combined with flux mode, it can be used for some creative real-time track manipulation, with everything falling back into place once you release your finger. From a more utilitarian perspective, deck control on the touch strip (in combination with the tempo-adjustment feature of the loop encoders) gives you a very natural way to manually beatmatch tracks, especially if you have a turntable background.

What makes the touch strip next-level, though, is that it can do more than just deck control. It can be assigned on the fly to two other features in Traktor, loops and FX. You do this by holding a finger in the touch strip and pressing the loop encoder or one of the FX buttons, respectively. In both cases, control is temporary. For example, when the strip is assigned to control looping for a deck, the loop is only active when you’re holding your finger on the touch strip (loop length is controlled by where your finger is). As a result, looping with the touch strip is more useful for performances, not for mixing purposes). Its trigger-style functionality makes more sense for effects, where the selected effect is turned on and off based on contact with the touch strip.

Does the X1 MK2 still bring enough to the table to make it deserving of a spot in your DJ setup? For a lot of people, I think the answer will be yes. If you’re looking for something to sit along side your mixer, the X1 MK2 is still the best Traktor controller, especially now that the touch strip makes manual beatmatching really nice and intuitive. I road-tested with the Z1, NI’s new compact audio interface / controller. That combo worked really well, and the portable size of each unit makes for a modular setup that you can adjust as each gig demands.

Looking beyond the DJ booth, the X1 makes for a pretty impressive MIDI controller as well, as the touch strip can track two fingers at once—transmitting MIDI for each point of contact. Unfortunately, I encountered some issues getting the X1 to switch into MIDI mode on a Mac, but this is apparently a known issue that NI is working on. Overall though, the X1 MK2 is impressive. The updates were well chosen and bring the unit in line with the latest that Traktor has to offer. 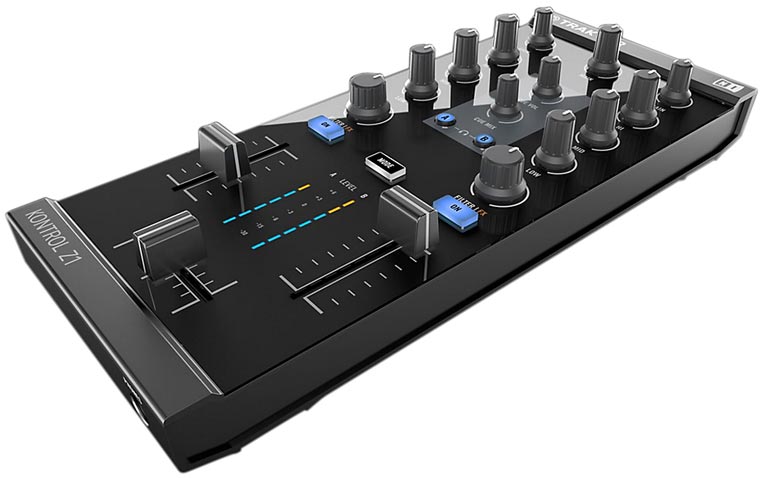 How to Choose the Right DJ Equipment
October 8, 2015