It wasn’t too long ago that digital drums were for drummers with deep pockets and a more experimental bent. As with all technology, prices have tumbled over the years, and as a result, the electronic kit has rapidly become the beginners’ kit of choice.

There are good reasons for this. They are incredibly versatile, with a huge range of sounds and features, plus, you can plug in a set of headphones for silent practice.

Alesis has been producing a wide range of digital kits for some time now, all of which packed plenty of features to the pound. This kit is one of the most affordable it has ever produced, however.

We see how it fares in our Alesis DM6 USB review

The DM6 digital drum kit is a familiar 5-piece arrangement, with rubber headed triggers. With the exception of the snare, the drum triggers are a moulded plastic ‘shell’ design, with the rubber head mounted within.

The snare differs slightly, with its playing surface mounted on top of the plastic shell, with the rubber edge exposed. This is because the snare is a dual-trigger, meaning that the ‘rim’ can be used to trigger a different sound to the head. Rim shots can thus be performed with an appropriate sound.

A crash and ride cymbal trigger feature, along with a hi-hat trigger, controlled via a foot pedal. The kick drum trigger is an upright type, employing a standard kick drum pedal for operation.

Often, one of the shortcomings with affordable kits is the hardware. To keep costs down, this can sometimes be a bit lightweight. Thankfully, the DM6 USB seems to buck this trend. The frame is a stable design, with nice, thick tubing and robust clamps.

The ‘brain’, or sound module is key to how a digital kit will perform. The module featured here is equipped with 10 preset kits, and 5 user slots, which can be edited and changed. In total, 108 different drum sounds are featured.

In addition, there’s an onboard metronome and 40 onboard patterns to play along with, too. Impressive at this price…

In terms of connectivity, though the pads connect via standard 1/4” jacks, these are part of a loom, which connects to the module via a single multi-pin connection. This is far neater than individual jack sockets.

A mini-jack stereo line out, headphone out and mix input (for connecting an MP3 player to play along with, for example) feature to the rear, along with a USB MIDI connection. This means that it can be easily connected to Mac or PC for use with drum software or DAWs. In addition, it can even be used with iPad.

The module is solidly built, and will easily survive being hit with a flailing stick, though its placement should make this occurrence pretty rare.

Whenever I’ve played digital drums of this sort of price, I’ve prepared to be slightly under-whelmed by the sounds. When I switched on the Alesis DM6, however, I was very pleasantly surprised. Kicks and Toms are meaty and powerful, snares are defined, with plenty of ‘crack’, but most of all, the sounds have are dynamic and expressive. Plus, each of the presets is very usable, with no silly sound FX kits.

Though rubber pads are sometimes seen as a compromise, those featured here provide a perfectly adequate bounce, and aren’t so hard that your joints will be punished if you play for long periods. As I’ve previously mentioned, the hardware is also very impressive at this price- thought plastic, it’s robust and heavy duty.

5
SHARES
VIEWS
FacebookTwitterGoogleWhatsapp
Tags:
Previous Article
The Beginners Guide to Buying Drums & Percussion
Next Article
How to Take Care of Your Drums 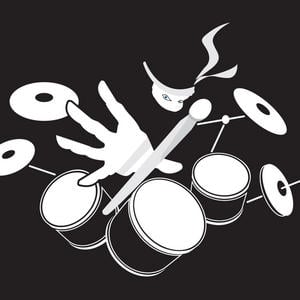