I’m no guitar hero but I’m very into improvising and soloing with my guitar. I have some advices for soloing strategies. Actually they are basic but I think they work out really good. Here’s my two cents.

Be a player who always has the ear and attention of the public. Make yourself interesting for them, surprise them with some various guitar playing. But keep the rules and stick to playing with the harmonies, structure and shape of the blues the band is playing. Feel the blues and know the blues-tunes harmonies (chord progressions) well. Don’t be afraid to use cliches. If you break to many rules and don’t play cliches you don’t play blues no more – then you play some strange avant-garde jazz to a background of blues music (if you’re lucky). Keep the rules and keep your own personality and originality at the same time. Then, if you sometimes have to break a rule – it will be heard and understood… But if you do it all the time it’s only going to be hard and strange to listen to your music.

Here’s a few tricks and tips I try to have in my trickbag for almost every solo. Not every time, not all of it at the same time in the same blues – but almost (depending on the blues tune feeling).

First of all, this is a real smooth trick you have to learn. It’s a must-have thing in your “Jacky’s Bag of Tricks” as a lead guitarist in a blues band.

You change the scales this way:

Now you can hold your left hand in one position all the time while you changing between the scales.

A solo guitar player also need to know all the modes of the blues scale:

The extended blues scale (the Mixolydian scale mixed whit the Aeolian scale and the “Blue Note”) often used by Jimi Hendrix and in progressive blues (a genre created by Jonny Winter 1968);

But don’t always use the blues scale or the Mixolydian. Throw in some licks and phrases played in melodic minor, diminished and the whole tone scale too. That’s sounds great in blues among blues cliches like “broken chords,” double stops and please – do some Loockwood playing on top of the comping chords between your soloing phrases.

If You Are a Jazz Cat

Use the Dorian scale when playing jazz/blues. Remember that swing (in the pocket) solos and melodies starts on upbeat-the 2nd beat or the 4rd beat of a bar. The melodic minor scale are also an common scale in jazz/blues and it sounds great. This both minor scale can also be combined with the blues scale, not only in jazz.

Play around with different rhythms. For example, if the drums and the bass is playing 4/4 you can play soloing phrases in the rhythm of “The Bo Diddleys Beat” (this is a form of “son clave”).

Start your blues solo phrasing on the 4th beat in a bar and end it on a 2nd beat. Leave the two next beats before the next bar free.

That’s kind of a cliche and spacing in blues. Its a nice trick to step into a phrase from one semitone above or two semitones below.

Always land your soloing phrase or on a chord tone (1, 3, 5 or 7) otherwise it will sound like the soloing phrase shall continue. To long phrases are hard to listen to and will leave no space in the music.

Sometimes, often in the last bar of the turnaround, you wanna create more dynamic and tension. A simpler way, rather than use the Super Locrian scale (the altered scale; you never do that in blues) is to move the minor pentatonic scale two semitones below the dominant chords root and you have all the 4 the altered (outside) tones right there. That’s a bluesy way to do it! The trick, the technique, of playing outside (the house) are known as “side stepping” or “side slipping.”

To all ya Blues Dogs and take some soloing breaks, let it be space in the music – play the bass line instead together with the bass guitar player some little time now and then! Learn some, a few basic, blues bass lines to improve your blues guitar chops.

Get that bluesy style, dog! 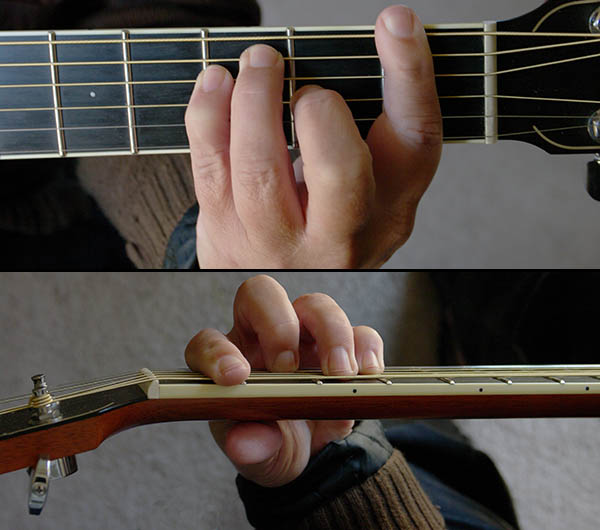