Ode To Danny Gatton: A Tune To Practise Hybrid Picking With Thomas Berglund

Ode To Danny Gatton: A Tune To Practise Hybrid Picking With Thomas Berglund

In this tune I’ll show the melody and the solo. There are two video lessons to the tune. In the first one I’m playing the tune and demonstrating the melody. And the second video is a lesson with the guitar solo.

The 1st phrase in the melody is this one:

In this phrase you’ll play the melody with the middle and the ring finger and the bass line on 5th and 6th string with the pick.

You do the same with the phrase on D7 but with double stops in the melody and the bass line on the 4th and 5th string.

The B parts 1st chord is D7 and the notes/tabs is below.

You’ll find the tabs/notes to the melody here.

Below you’ll have the video lesson on the solo and you’ll find the tabs/notes here to it.

I’ll show the whole solo in the video lesson and below there are some of the hybrid picking phrases.

The first phrase I’ll show is this one in the 3rd/4th bar.

The next phrase that’s in the 10/11th bar is a arpeggio phrase where you’ll roll with the pick, middle and ring finger in triplets. The chord is D and you’ll roll upwards the chord that’s a effective way of moving a chord from one position to another on the fretboard. If you’re not used to do this you should start to practice it in one position and when you get the speed into it you’ll change position as in the solo phrase.

The phrase is below in tabs/notes.

Here you’ll play with the pick-middlefinger-pick on the 4th string and with the middle finger on the 2nd string and move the phrase in 6th upwards the fret board. It should sound between muting and playing on the 4th string. This is a feel thing where you find how much you should mute the string when you have practice it for a while. If you’re not used with chicken picking you should start in a slow tempo and work up the speed to it.

I hope you find some stuff in this tune to be useful and my recommendation is to start in a slow tempo and speed it up a bit at the time.
Another recommendation is to listen to Danny Gatton. For me he’s a master of the style and everything he has recorded sounds great in my ears.

About the Author:
Thomas Berglund is a musician that has played in many different styles through the years and he has his heart in music with improvisation. He also work as a guitar teacher and have a YouTube channel with guitar lessons, releases and concert videos. Here’s Thomas’ guitar lessons website. Feel free to subscribe to his YouTube channel to get the latest from Thomas. 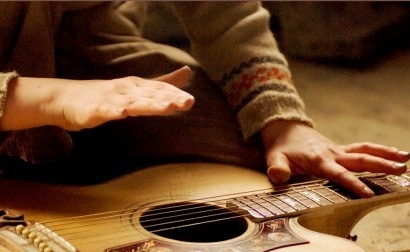