The Lydian Mode With Jens Larsen

The Lydian Mode With Jens Larsen

I’ve had a lot of requests for a lesson on the Lydian mode, so I thought I’d finally try to honour that.

I’ll try to give you some, hopefully new, melodic and harmonic tools to make it easier to make lines that has that sound.

The lessons also contains some examples of how you can use them in a II V I as a surprising sound on the I chord.

Let’s first shortly look at what the Lydian mode is. If you play a Maj7th chord as if it is a IV chord in a major scale you have pretty much the same as the normal major or Ionian sounds, but you also have the #4 or #11 in the sound. If we look at that in the key of C this means that we play it using the G major scale that gives us this build up of the chord:

The main feature being the F# in the chord.

You should note that I am considering the Lydian sound something that is connected to one chord, in this case a Cmaj7(#11). I don’t see it as a key or really think it makes too much sense to think of a songs as being in D Lydian etc.

Let’s first check some chord voicings since it often makes things a lot clearer if you know what the sound of a Lydian chord is in whatever context you want to use it. Most of the time on guitar we leave the 5th out when playing the #11, so in essence you get a Maj7b5 chord. I have another lesson on Maj7b5 chords and how you can use them which you might want to check: Maj7b5 Chords and Arpeggios – a powerful tool for superimposition.

When you start to insert these chords into songs you might come across places where it won’t work in the context, not so much that the chord don’t sound good by itself, but more because it doesn’t work with what just happened or will happen in the progression. Mostly because it makes it sound like the chords coming after it or just before it.

The trick to get the Lydian sound in you lines is in my experience mostly about emphasizing the #11 but not lose the sound of the chord, so what we need are a few melodic devices that helps with that. The way I am going to go about that is to find some structures that contain the base of the chord: 3rd and 7th (E and B in this case) and the #11 (F#).

The first example is in fact just summing up those 3 notes B E F# which gives us a Bsus4 triad to make lines with. Sus triads are great devices if you check out Mark Turner you’ll hear them often used in his playing.

The II V I line is quite basic: over the Dm7 I used an FMaj7 arpeggio and a G7 arpeggio over the G7 chord. On the Cmaj7 the first half of the bar is playing the Bsus4 triad from F# to B and from there it descends down the scale to an F#.

Another fairly obvious structure to use is of course the Maj7b5 arpeggio (C E F# B), which many don’t check out because it is not strictly a diatonic arpeggio in any scale.

The Dm7 part of the line is an Am triad, and on the G7alt I am in fact playing a scale fragment from the C harmonic minor scale. The Cmaj7(#11) line starts out with a Cmaj7b5 drop2 voicing played as an arpeggio. After that the line continues scale-wise down until it ends on an E.

If we extend the B E F# and add a D and an A we have the B minor pentatonic scale which also is a solid device we can put to use for Lydian sounding lines:

The Dm7 line is a scale run from F to C. On the G7 it is an Bbm7 or Db6 arpeggio. The Cmaj7 line is first a pentatonic scale pattern similar to playing the scale in diatonic thirds. After that the line ends on a B.

I hope you can use the ideas and structures in this lesson in you own lines to explore the Lydian mode.

If you want to download the examples for later study I have them here as a PDF: Lydian Mode

4
SHARES
VIEWS
FacebookTwitterGoogleWhatsapp
Tags:
Previous Article
The Role Of Self-Esteem For Musicians – With Kevin Goetz
Next Article
How To Boost Alternate Picking Speed And Accuracy 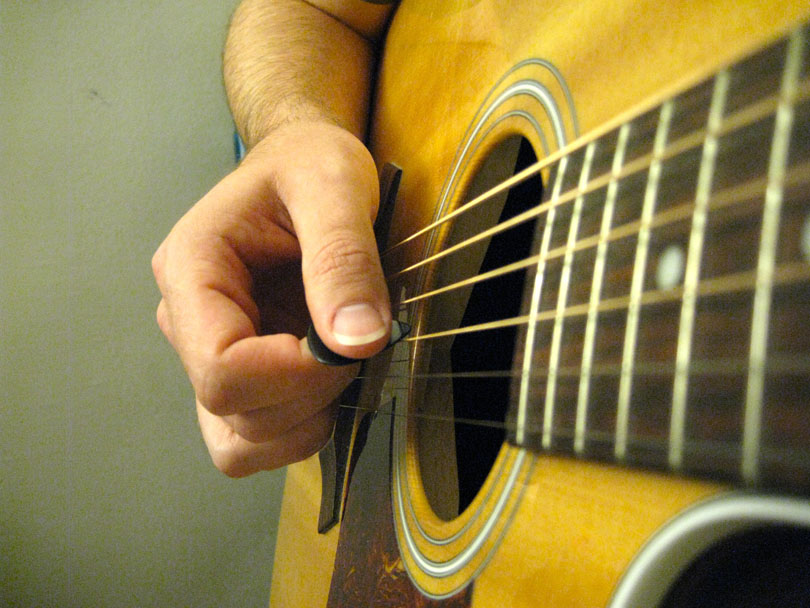 How To Boost Alternate Picking Speed And Accuracy
May 21, 2015