The Jimi Chord Part 2: What The Funk?

The Jimi Chord Part 2: What The Funk?

Funk is some of best fun you can have on the guitar. It’s a party; get on up! The simplicity to the style is a part of its beauty, but also becomes deceptive in how easy it looks. While it is relatively simple musically, the feeling you need to inject into your playing to get the right sound, is hard.

If you have a background in reggae, or any back-beat heavy styles, you will probably get the hang of it a little faster than those coming from say, heavy metal, or folk. They are different animals; and you may not have been in these kinds of musical scenarios before; but, diversity is a good thing for a guitar player. Funk is all touch, tone, taste and feel. This is what highlights the individuality inside the recycled themes. Once you feel it, once you get it, it’ll never be boring. Until then, you might consider it to be.

Personally, I didn’t understand how much fun I was missing out on until I was there at the party myself. Before I was a guitarist, watching old Parliament videos, I would ask to myself, how is the guitar player having so much fun right now? He doesn’t seem to be doing much, nor does the song seem to be going anywhere, but damn he looks like he’s having the time of his life.

What’s going on here? I couldn’t quite put my finger on it. After developing a steady acoustic delta blues rhythm, I began to recognize and understand the hypnotic qualities of the funk rhythm. It was just another kind of blues. The long format of the rhythm sucks you in, and before you know it, you’re tapping your foot to the beat. The hardest part about the funk jam is keeping the party alive while staying cool, calm, and always in the pocket. The music part is easy.

Funk jams will feature a small number of chords with an even fewer number of chord progressions throughout the song. The Jimi chord will come up in lots of funk parties, only here, people will probably call it by its contemporary name, E7(#9). If you modify the “Purple Haze” rhythm to be a little funkier, you can start to hear where it’s going. Any funky rhythm will feature similar patterns of playfulness, coupled with a percussive ticky-ticky sound created by small movements of your left-hand, making an effect similar to palm muting. Your left-hand will pull off of the fingerboard ever so slightly, just to where the pitch of the note can still be heard, but the majority of the sound being created is percussive. Think about that ’70s porn music sound, then take away the wah-wah and the cheese. Try striking the open, low E, string on the “1” as you go: 1 – ba-donka-donka – 3 – 4 – and-a-1 – ba-donka-donka – 3 – 4 – and-a-1… etc. You may have heard the tired cliche from jazz music: it’s not what you’re playing, it’s what you’re not playing. While anybody whom attempts to say this to you with a straight face is likely some kind of douche, the cliche, and moral of the story, can be applied to the rhythm of funk music. As previously counted, the rhythm creates little spaces where things can happen. There’s a tiny hole left by the invisible 2 beat for that snare drum to poke through. That big space left in the back two beats of the measure creates fill opportunities throughout the ensemble, and, leaves you somewhere to go later.

The possibilities are endless, but the trick is to always leave room for later. You want to bring more to the party, not drain the party. If you start off with too much, too soon, you will have a hard time keeping it together over five minutes. Relax. Take it easy. Feel the steady count before you begin. Visualize a drummer counting a slow 4/4 with the left-foot opening and closing the hi-hats.

To make the sound of the hi-hats closing, they must first be opened. The opening is an action which needs to happen before the beat. Not only does this take time to do, but it also makes another sound. The closing of the hi-hats can be rock steady, always dead on, but the action before the beat is never exactly the same twice. It is randomized through a few simple variables: how far the hi-hats are separated while opening, the speed at which they are opened and closed, the proportion of time given to the action of opening versus the action of closing the hi-hats; as well as, compounding the amount and type of sound created through each individual action.

We are not in complete control of all these variables, all the time. There’s a subconscious element to the core rhythm where if you examined very small fractions of time, the rhythm would seem chaotic; unpredictable. However, over longer periods of time, and then over the course of seconds, and minutes, very definitive patterns emerge from the chaos. A similar effect to the hi-hat opening and closing can be achieved when clapping your hands. Start with your hands closed. As a thought experiment, and a musical riddle, starting with your hands closed, try to clap and hold exactly two, whole-notes, back-to-back. No ties, no slurs, nothing extra, just exactly two whole notes over two measures of time. If you think you did it, you’re probably doing it wrong. A whole note, in order to be truly whole, lasting exactly one complete measure, must be followed by a rest of any length. Without a rest, this whole note would be closer to a double-dotted half note. By using this thought experiment, you will start to get the hang of starting your rhythm before it begins. Just follow the drummer, listening closely to the hi-hats and snare.

With our thought experiment in mind, and now that we have developed a little bit of that core rhythm, we’re going to apply the Jimi chord we learned about last time, to funk. Jimi is packing his bags and moving to, Washington, DC. I hope he remembers his Cry Baby!

While keeping in mind that same sound and tonal quality of the Jimi chord, we’re going to mush together three chords together in a loop, using hammer-ons and pull-offs. All three of these chords are compatible with, and complementary of, the E7(#9) chord; each one offering a slightly different sound and harmonic quality. Try mushing all three chords above to make one fluid sound. Comparing that sound, to the general sound of the Jimi chord, the two should be very similar. Starting out by barring the seventh fret with the index finger, each successive chord plants one more finger with a hammer-on. Strike the first chord with a down-stroke for the 1 beat, then during the following up-stroke, hammer-on the at the eighth fret on the B-string with the middle finger. The third chord gets played in the same way, hammering on the ring ringer at the ninth fret on D-string, during the immediately following down-stroke.

Once you reach this third chord, it can hang out for the remainder of the measure, pulling off the two fingers added to start again. It’s almost like the hammer-on comes just slightly ahead of the pick passing across the strings. The right hand motion is a gentle flick of the wrist, and can be thought of as being up-down-up-down, instead of, down-up-down-up. The force placed on the strings from the pick should be very gentle and loose, like you would use in a very smooth legato run jumping between strings while maintaining a consistent volume.

The right wrist needs to rotate only 45 degrees to cover all six strings, and while keeping the thumb and index finger holding the pick very relaxed, independent of the wrist, the hand drags the pick slightly behind the wrist like a whip. The action of palm muting with your left-hand, combined with the right-hand pick emphasis, along with the magic of the 11 chord, will allow you to pass the pick across all six strings with almost total impunity, from which you can then start to create little call-and-response style melodies.

As you get the flow of the three-chord mash, graduate it to an A-B style of chord progression. The three-chord mash will be followed by an alternating fourth chord. The fourth chord takes place over those nice big spaces in the back half of each measure. The 4/4 time is slow, somewhere around 68 – 76 BPM will be a comfortable pace. This last progression has a similar kind of feel to it, but it descends an octave over the course of the loop. The chords are essentially variations of E-to-D. By applying what you heard in the last progression, feel out how you want to flow this progression by listening to the melodic content. The last three chords here will mush together a little bit to take it back to the top. Remember, that just because there are notes at your disposal, it does not mean that they must all be played, all at once, all the time. However, you should fret them even if you’re not playing them, because, it will allow your right-hand to make fewer mistakes. Over time, the right-hand develops the graceful touch which allows one to choose which strings to highlight with each pass of the pick. Both of your hands should operate not at all like a compartmentalized government system; each shall know exactly what the other hand is doing. Stay tuned for upcoming chapters including “Blues in A: The quest for great BBQ.”

About the Author:
Dealey is a Vancouver, Canada based guitarist, songwriter, recording engineer and producer. He is the author of the forthcoming independent book, The Relative Nature Of Chords: A street-smart field guide for guitar. Watch for exclusive excerpts on Ultimate-Guitar! You can support his ventures by buying his music here or talk to him about collaborating on your project by email to: info(a.t.)aurora-studios.ca 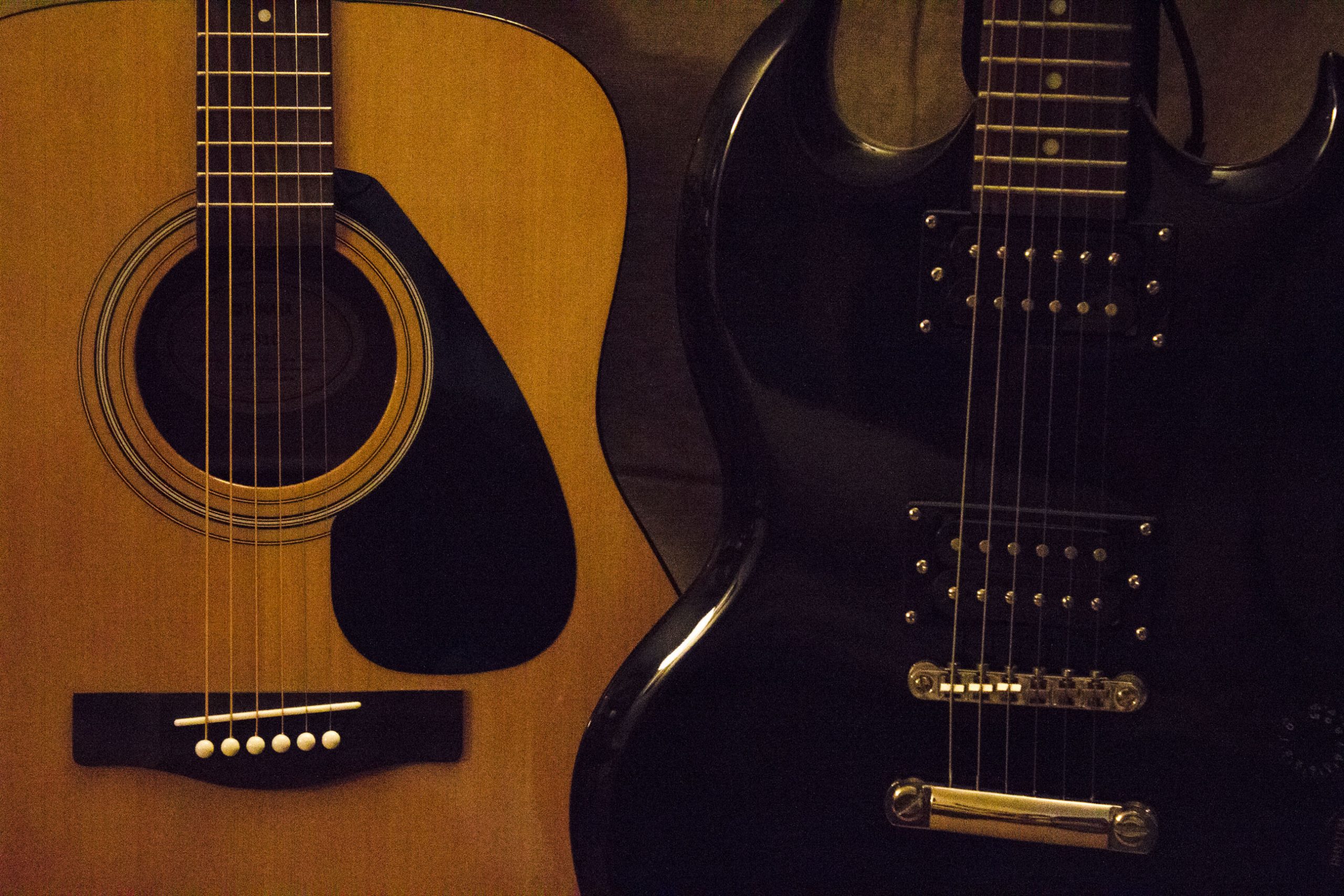