In this lesson, I want to first demonstrate 4 exercises that you can use to gain the necessary vocabulary to solo over a turnaround with chords. I also give three examples of how I would make lines using the exercises (or actually chords in general).

Voicings in a Scale

Often when I give exercises for chords within scales I use diatonic chords, but in this case the goal is to play melodies over one chord and have that melody harmonized. Therefore I have made 4 exercises harmonizing a scale with different chords, so that we have material that will cover melodies with these notes over 4 different chords. There are of course more chords in a key than four, but making exercises for those is fairly easy when you already have these.

All the exercises harmonizing the scale on the B and E string. I find it practical to use 3 note voicings on the B string and 4 note voicings on the E string, but that is mostly a preference, and certainly not a rule. If you find the voicings in the exercises hard to recognize or place then you could check my lessons on Drop2, Quartal or triad voicings in jazz. That should give you a better understanding of where I got them from.

The first exercise is to harmonize the F major scale with an Fmaj7 chord. You will notice that I am quite liberal in my choice of voicing so I will use F triad, Fmaj7 and F6 voicings in order to make things easy to play or because I think it sounds better. This is in fact how it is common to interpret an Fmaj7 chord in jazz.

The only note that we need to explain further is the 4th degree: Bb. Since Bb does not sound nice as a melody note on Fmaj7 (That note will imply a C7 or Bb type sound) I have harmonized it with a Bb triad and with a Gm7 voicing in this exercise. The 4th or 6th degree is often a note that needs special attention in harmonizations since it often does not fit with the chord.

The second exercise is the same exact idea but now using a Gm7 chord instead of a Fmaj7. In this case the difficult note is the 6th, E which wants to sound like a 13th or makes the chord sound like C7 instead of Gm7. In the lower octave I chose to harmonize it with a C major triad because the movement at that point of the exercise sounds quite smooth alternating Bb and C triads. In the high octave it is a bit easier to let it sound as a 13 so in that one I harmonized it as a Gm7(11,13).

The third example is harmonizing the F major scale with a C7 chord. Again the 4th degree (F) of the chord is not working well with the chord, but on a dom7th chord you can often get away with playing a sus4 chord instead and then still retain much of the chord. This is easy to play and also quite simple to construct, since it is the previous voicing with the 3rd replaces with the 4th.

The last example is a D7b9, which is not diatonic to F major, but instead is an auxiliary dominant for the II (Gm7). Since the scale you would use for such a chord in this key is G harmonic minor I harmonized a G harmonic minor with and added F. The F is sort of a hack to give us the option to play a D7(#9) chord which as you will see in the example works well in this context.

Since this a dominant I again have to take care when harmonizing the 4th (G) in the scale, but I can approach it with the same solution as the C7 and make it a sus4 chord which in this case is then a sus4(b9) chord.

A bonus to adding this last exercise is also that we can us that over a C7 to have an C7(b9) sound in a solo.

If we use the progression Gm7 C7 Fmaj7 D7b9 we now have a way to play any note with a chord under it at any time, which should make it possible to make chord solos. Of course the same rules apply to the melody as it does if we don’t harmonize it so it still has to be somehow related to the chord and will have chord notes on the strong beats of the bar.

In the first example I am first running up the scale skipping the root on the Gm7. When the melody resoloves to the root it continues into a C7(13) chord voicing. The melody that I am using on the C7 uses the fact that our 3note/4note voicing system often makes it easy to skip up a fourth or a fifth, the Fmaj7 melody is using basic drop2 voicings which you could refer back to Am7, Fmaj7 and Dm7. The D7b9 melody is using the Dim chords which are easy to move around and makes a melody with that.

In the 2nd example I turned around the turnaround, so it becomes Fmaj7 D7 Gm7 C7. I start out with a scale run which is literally the beginning of exercise 1. The D7b9 line is less dim chord and more using basic triad voicings. On the Gm7 the melody is leaning more on rhythm than movement. This is something that the chord voicings lend themselves very well to, and also a good compensation since the range is a bit limited and it is difficult to really move a lot in a short time in the way you might be able to in an unharmonized line. The C7 is using the F harmonic minor which corresponds to a transposed version of example 4. The way the #9 is resolved using the b9 is a most-know in both comping and soloing. I let the line resolve to an Fmaj7 voicing on the and of 4.

The final example is starting with a Dm triad arpeggio harmonized with Gm chords. I then resolve the final A to the G. All voicings using the Gm7 exercise in the beginning of the lesson. The C7 in this example is again using the fact that it is easy to skip a fifth or a fourth up with the voicings I chose in the exercise. The line on the Fmaj7th is using first a drop2 and then two voicings coing out of an Am triad. On the D7b9 I start with to dim voicings and then move over to a D7#9 and a D7b9 to resolve to a Gm7 voicing on the and of 4.

I hope you can use the scale and the examples I gave here to make some harmonized lines and chord solos for yourself.

If you want to you can download a PDF of the examples here for later study: Soloing with Chords Part 1

6
SHARES
VIEWS
FacebookTwitterGoogleWhatsapp
Tags:
Previous Article
Learn The G Ionian Grace Note Lick With Chris Zoupa
Next Article
This Is Why You Suck At Guitar: Your Picking Patterns Suck, With Ben Eller 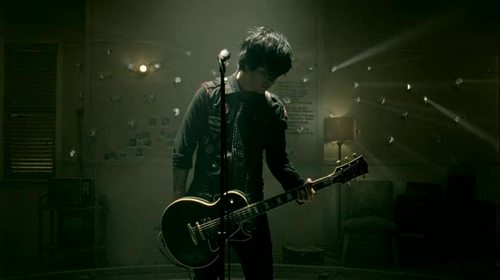 This Is Why You Suck At Guitar: Your Picking Patterns Suck, With Ben Eller
May 5, 2015