Jimi Hendrix is arguably one of the most influential players ever to wield an axe. His mind, his touch, his technique, were a magical combination of talent, prowess, dexterity, and explosive creativity – it was effortless. Far ahead of his time, the flare, the charisma, the passion with which he played, all worked to create his legendary status. He played upside-down and backwards – literally.

Left-handed guitars were a custom thing – and he played so hard, he set it on fire. He was a true innovator of the instrument, helping pioneer the development and use of effects and distortion with stomp boxes that are now the basic tools we take for granted today. The way he fused rock, jazz and blues together changed the way we play and learn the guitar. Forever. His impact on the instrument was so far-reaching, there’s even a chord named after him: the Jimi chord.

It may be the only chord to bear a person’s name. The name is perfectly suited for the chord. A fusion of major and minor, jazz and blues, blues and rock, sax and trumpets bleeding out distorted guitars on an open canvas being painted before your eyes. The sound of the chord has a trace of his essence still left behind from his short stay on Earth. While he may not have been, and probably wasn’t, the first to play it, it was through his songs that it came to be an active part of guitar vocabulary today.

Sometimes, someone will be barking chord names at you on the fly, and for whatever reason, one of them might be, “E Jimi.” That’s probably where the name came from. Someone would ask, “what chord you playin’, Jimi?” To which he’d reply, “E!” Then the other guys probably started telling other people, “… You know, like how Jimi does it. E.” It could be A Jimi, it could be D Jimi. Whatever Jimi you’re jellying up your jargon with, it will almost always mean a specific voicing of the contemporarily named, sharp-nine chord. E is the most popular, because the open strings allow you bounce off the low string before hitting the meat of the chord, while maintaining a jangly sound through the open high string. The chord is in the middle four strings, but the drone from the open strings can help fill the sound while changing chords. The notes here are: E – G# – D – G. The same thing could be played on the lowest strings, where the shape looks a little different, as does the sound of the open strings’ drone. Transferring that same shape to the lowest strings creates a purely dominant seventh chord, with no fifth. The Jimi chord is useful in a number of scenarios. Rock loves it. Try going back and forth between these two chords – we’ll call them, E and A – with a rock-blues feel similar to, “Purple Haze.” It’s a driving 4/4 rhythm, at a moderate-to-slow tempo, leading with the lowest string, placing a strong accent on the 2 beat, and introducing a “big 4” every second bar.

Between these two chords, the jam could go on indefinitely. However, sometimes it’s nice to take things somewhere, and then bring it back home again. You could play it out as a 16 bar blues in E. When you switch to, D and G, it feels like you are going to the IV. WTF? I thought we were playing blues in E? How is, D, the IV in E blues? There are a lot of questions when you start looking deep into things, but all you really have to do here, is pretend that this particular D chord is an A; then all those unimportant questions go away.

The final three chords then play out as the turnaround, mushing the last two chords together in a bar before looping back to the beginning. Stay tuned for upcoming chapters, including – Jimi gets a one-way ticket to Funky Town – and, “The C Major Scale: The story of why every good boy deserves fudge.”

About the Author:
Dealey is a Vancouver, Canada based guitarist, songwriter, recording engineer and producer. He is the author of the forthcoming independent book, The Relative Nature Of Chords: A street-smart field guide for guitar. Watch for exclusive excerpts on Ultimate-Guitar! You can support his ventures by buying his music here or talk to him about collaborating on your project by email to: info(a.t.)aurora-studios.ca

How To Deal With Criticism – With Kevin Goetz 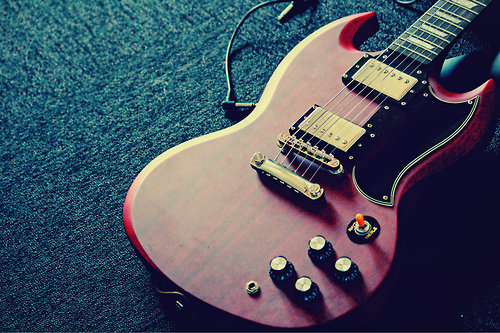 Learn The Cluster Like 7th Chords With Jens Larsen
April 27, 2015