Showing Your Work: The Difference Between 6 And 13

Showing Your Work: The Difference Between 6 And 13

Were you ever discouraged in math class when you were deducted points for not adequately showing all of your work? It seemed like a trivial thing. The answer to 1 + 1 is 2. The answer would always be the answer – and that’s all it can be! It’s a finite scenario – what difference does it make how you get there?

Until today, somewhere around 95% of you have never encountered a real-life scenario where the answer to a simple question based in the addition and subtraction of small integers became dependent upon how one arrived at the answer. What is the difference between a 6 chord and a 13 chord?

If we were to follow primal logic, we would say the difference between 6 and 13 is 7. Back in math class, this would be accepted as correct, and the finite truth. Music however, is not specifically finite; therefore, it is not always safe to assume the same types of logic will always work in any given scenario. Many times it will, but an unknown number of times it will not. The 13 chord is a case of the latter. When working with guitar chords, the difference between 6 and 13 is not 7, but 9 + (-2). This is the hidden work behind the answer to the math equation. In chord world, negative 2 would be equal to the dominant seventh note, and 9 is equal to the second interval from the root of the chord – typically, but not always, played one or two octaves higher than the lowest notes in the chord.

Below are two voicings of the same chord stepping down from a dominant seventh, to a sixth chord. You can put the red note (root) anywhere you like on the neck, but for the purpose of academics, A is a nice place to play these chords. Use the shapes to move this chord to other notes, such as F#. Slide the whole shape and grip of the chord chord up or down the neck until the red note is the root note of the chord you wish to play. No matter what note the root is, the difference between a 7 chord and a 6 chord is one fret.

You could play both the 7 and 6 tones together, like in the second 6 chord, but you will begin to hear the sixth tone as the dominant feature, thereby making the seventh tone unnecessary for ultilizing the harmonic function of the 6 chord. While adding the seventh tone is audibly pleasing, and it could be included just for the sake of convenience (i.e. ease of grip for the chord), one can choose to add this note, or not, to a 6 chord. The dominant seventh tone alone will not alter the harmonic trajectory of the chord.

While showing our work when using our chord formula for a 13, we have discovered that while 13 = 6 + 7; 7 = 9 – 2. In this particular scenario, the number seven becomes a variable string array with contents of 9 – 2. The equation contains a variable inside another variable.

In terms of practical reality, what this all means is: a dominant sixth chord becomes a thirteen chord when the conditions of 6 + 9 – 2 are met.

The tones contained in the string array defining the 13 chord are: 6 – 9 – 5 – R – 3 – 7. In some cases, it can become possible to eliminate the third interval from the chord because the interval between 9 and (-2) is a major third, accomplishing the task of defining the harmonic structure of the chord as a dominant. This point is illustrated through the chords below. Note how the chord becomes minor sounding when the third tone is removed. Played in this fashion, A 13 (no 3) becomes a substitute for Em-9. Then depending on the context of the whole progression, the name of the chord could possibly be changed to Em9 /A.

About the Author:
Dealey is a Vancouver, Canada based guitarist, songwriter, recording engineer and producer. He is the author of the forthcoming independent book, “The Relative Nature Of Chords: A Street-Smart Field Guide for Guitar.” Watch for exclusive excerpts on Ultimate-Guitar! You can support his music here – or talk to him about collaborating on your project by email to info(a.t.)aurora-studios.ca.

6
SHARES
VIEWS
FacebookTwitterGoogleWhatsapp
Tags:
Previous Article
How To Take Any Song And Make A Really Cool Unplugged Acoustic Guitar Version Out Of It
Next Article
How to buy a Guitar! – Part 1 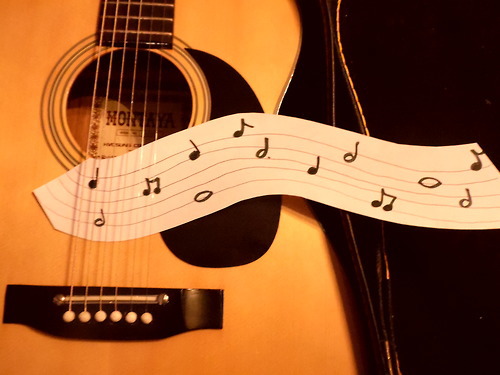