It has become more and more popular over the years to create unplugged acoustic versions of electric songs. Sometimes these acoustic versions you hear sound great, and other times they can kind of miss the mark, and end up sounding pretty average. It all comes down to how you approach it.

To play a version of a song on your acoustic guitar in the exact same manner as it’s played on the electric generally doesn’t work. Sure you can do it, but it won’t sound very good most times. This is because despite the many obvious similarities between the acoustic and electric guitars, there are differences between the two and this is what matters when creating your unplugged acoustic version. There is even a bigger difference if you are creating a solo version of the electric song as oppose to playing it with a band. In this case there are more things you need to compensate for that the band would otherwise provide.

In this article I am going to present to you some cool, easy, and unique ways you can approach creating your very own acoustic versions of electric songs in both a band and solo context.

How to Get That Acoustic Sound

So how then do you go about getting your unplugged song to sound more “acoustic” like? Here are some suggestions for you to consider:

Incorporating bass lines into your progressions

Including elements of the existing bass line of the song you are creating the acoustic version from, is a great way to fill out the sound and add movement and interest to the progressions you play. This idea is particularly good if you are playing solo, without a band backing you.

It’s out with the power chords, and in with the open and bar chords

A great way to really fill out the sound in certain parts of your unplugged song is to replace some, or all of the power chords of the electric song with full chords. These can be open or bar chords depending on the situation and what you want to do. Taking this approach helps compensate for the lack of sustain that you get with the electric guitar, especially when distorted. It will give your unplugged song more of that acoustic like sound you are after.

Another way to compensate for the sustain you get from the electric guitar is to strum out more in your acoustic version. Strumming can provide a very cool percussive effect too when done well. If you are creating a solo unplugged version of a song, strumming out more will also help compensate for other instruments, especially the drums, in your unplugged acoustic version.

Sketching out the melody in your chord progressions

Including hints of the songs melody in your chord progressions can sound great in your unplugged song. You will find that you naturally create some really nice embellishments and extensions to your chords when you do this. This approach can be great if you want to substitute something for the solo in the song you are creating your version from, or for filling out other parts of the song where there is no vocal perhaps. I will give you an example of this a little further down in the article.

One of the more challenging parts in creating your unplugged version can be the solo, assuming there is one in the song you are creating your arrangement from. Sometimes the position an electric solo is being played on the guitar, or the techniques and effects being used can leave your acoustic version of it sounding poor and weak.

Here are some ideas for you to work with in this area of your acoustic song to help compensate for the things you don’t have that the electric guitar can give you:

Soloing can be particularly challenging when you are it, and there is no band to back you. A great way to get around this is to make use of the lower open strings of your guitar by sounding them out (ie. Droning) in-between the riffs and licks of your solo. While the lines you play in your solo can be thought of as the right hand of a pianist, the droning open strings are much like the left hand, providing your solo with some accompaniment. This approach is very effective but can be limiting because you only have the E, A, and D open strings to work with, however a capo can change all that.

Filling the gaps in your solo with chords hits

This approach is similar to droning open strings in that it will provide your solo with some accompaniment, however you won’t be relying on open strings here so you can use this method in any key. By “chord hits” I am referring to filling the gaps in-between the riffs and phrases of your solo with the chord that is happening at the time. You are more or less sketching out the chord progression that is backing your solo, while playing the solo at the same time.

A cool sound you get from this approach is the syncopated rhythms you create between the phrases of your solo and the chord hits you inject between them. This will happen without you even meaning it to, and is a nice side benefit you get from applying this method.

The more ways you know to play the one chord on your guitar the better with this approach as you will always have a chord nearby to use no matter where you are soloing on the fretboard. Approaching your chord hits from a fret above or below also provides a nice effect when using them.

You will find that certain techniques are harder to do on your acoustic guitar compared to the electric. A good example of this is bending. Due to the extra tension in the strings of an acoustic guitar, it can be hard to bend them in certain positions on the fretboard.

A good substitute for a bend is a slide. Simply slide to your note instead of bending to it. It’s a slightly different sound to a bend, and it’s the nuances like this that will give your unplugged song that “acoustic” sound compared to the electric. If you have your heart set on bending, then change the string/position you are bending the note from. Some strings are much easier to bend than others. For example, bending the 7th fret on the third string of your guitar is much harder to do than bending the 3rd fret on the second string. Try it.

Double stops are a great tool to consider when it comes to soloing on your acoustic guitar. Double stops are when you play two notes together at the same time on your guitar, and will add intensity to your solo lines. A nice contrast is created between the double stops and your single notes when you use them, and they also “thicken” up the sound of a riff. This provides you with yet another way to compensate for the lack of distortion and sustain of the electric guitar.

Have a listen to the following chord progression and melody:

The melody above could be a vocal line, or a riff played by the guitar or another instrument in the electric song your are creating your unplugged version from.

Whatever it’s role may be, we can include parts of it in our acoustic version for a cool effect. Have a listen below:

I shifted the melody down an octave for the acoustic version so it would be in the same position as my chords. This way I was able to includes elements of it in my progression. This approach is very effective for filling out certain parts of your acoustic song that perhaps have no vocals, and you want to make the guitar part sound more interesting, or it can also provide you with a very nice interlude, maybe substituting for the solo of the electric version.

About the Author:
Simon Candy is a highly successful, experienced, and sought after guitar teacher based out of Melbourne, Australia. He is founder of Simon Candy School Of Guitar and also specialises in and offers the very best lessons for acoustic guitar online.

12
SHARES
VIEWS
FacebookTwitterGoogleWhatsapp
Tags:
Previous Article
How To Make The Blues Scale Your Own
Next Article
Showing Your Work: The Difference Between 6 And 13 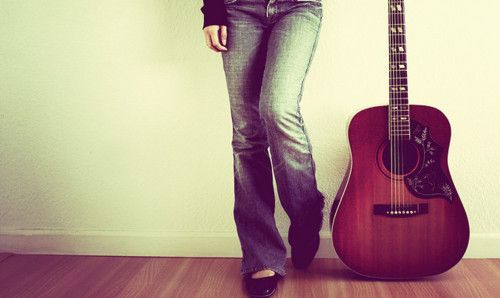